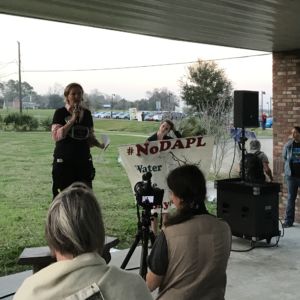 Anne Rolfes, founder of the Louisiana Bucket Brigade, speaks at a protest rally before the community meeting.
News

Napoleonville, La. – While the fight against the Dakota Access pipeline may be coming to a close, protesters descended on a public hearing Wednesday 1,600 miles south of the protest camps in North Dakota. The protesters may be out of options for stopping Dakota Access after the U.S. Army Corps of Engineers granted its approval earlier this week, but they’re still aiming to put a halt to the Bayou Bridge pipeline, which will deliver oil coming from oil fields in the north to refineries based in Louisiana.

The hearing was hosted by the Louisiana Department of Natural Resources. Lawmakers and community leaders voiced strong support for the project, but they were met with raucous boos and profane screams from a group of protesters opposed to fossil fuels.

One state representative, Beryl Amedee, earned the cheers of the protesters for much of her speech as she expressed her interest in investigating the economic benefits of the project in contrast to the safety and wellbeing of Louisianans. Amedee explained that she closely examined the arguments on both sides. She was concerned because the pipeline would cross the bayou where much of her district gets its drinking water. But she ultimately concluded the safety of pipelines compared to other means of transportation was unmatched. While most of the local residents in attendance applauded Amedee’s decision to support the pipeline, the group of protesters quickly turned on her and tried to drown out her speech with chants and screams—as they did with most other speakers at the public hearing.

Most of the protesters at the hearing were not so much opposed to the Bayou Bridge pipeline as they were to oil itself. “No Oil,” chanted one protester, who also expressed opposition to any energy infrastructure project. Anne Rolfes, founder of the Louisiana Bucket Brigade and a leader of the protest effort, told InsideSources that her group wanted a transition to renewables.

The Bayou Bridge project is considered critical in order for Louisiana to maintain its economic standing. Over 40,000 jobs in Louisiana are dependent on the energy industry, and the median income for these workers is twice that of the average worker in Louisiana.

These jobs need a source of crude oil. There’s been a national shift in crude production with shale, explains Dr. Gregory Upton of the Center for Energy Studies at Louisiana State University. “Because of the change in where this oil is coming from, there are infrastructure changes that have to be made.” Upton, who spoke at the hearing, released a new study earlier this week that showed the Bayou Bridge project would generate $830 million in economic benefits this year. The study was funded by Energy Transfer, one of the companies building the pipeline, though Upton stressed that the economic modelling used widely-accepted methodology.

A number of the protesters pointed to a rise in the number of the pipeline spills affecting Louisiana. But Brigham McCown, who previously served as the Administrator of the Pipeline and Hazardous Materials Safety Administration (PHMSA) doesn’t believe this is cause for alarm. Under his watch, PHMSA reduced the volume of spill required for reporting by 75-80 percent. So while spills are rising, he explains, it’s disingenuous to suggest they’re becoming more frequent. An economist from Louisiana State University at the hearing pointed out that there is a higher likelihood of having a car accident on the way home from the public hearing than a pipeline having a spill.

While protesters voice concerns about the environmental impact, supporters of the pipeline say it is the safest way to get the crude oil to the refineries and keep the jobs that rely on that oil. “Crude oil is just crude oil until it gets to the refinery,” says former Congressman Chris John, now of the Louisiana Mid-Continent Oil and Gas Association. “This is a critical link in getting the crude to where it needs to go.” John feels comfortable with the project because Energy Transfer Partners has an extremely safe history, the pipeline is monitored 24/7, and the pipe will have thicker walls in sensitive areas.

None of these points will do much to assuage the protesters, who were inspired by the protests in North Dakota. The tie-ins to North Dakota were impossible to miss and protesters at a rally before the public meeting praised those up north. The most noticeable banner at the rally wasn’t focused on Bayou Bridge but instead on Dakota Access. Perhaps no speaker at the public hearing faced more ridicule from the crowd than a law enforcement officer concerned about the violence by protesters in North Dakota. The speaker was shouted down by protesters who accused him personally of being a “murderer.” 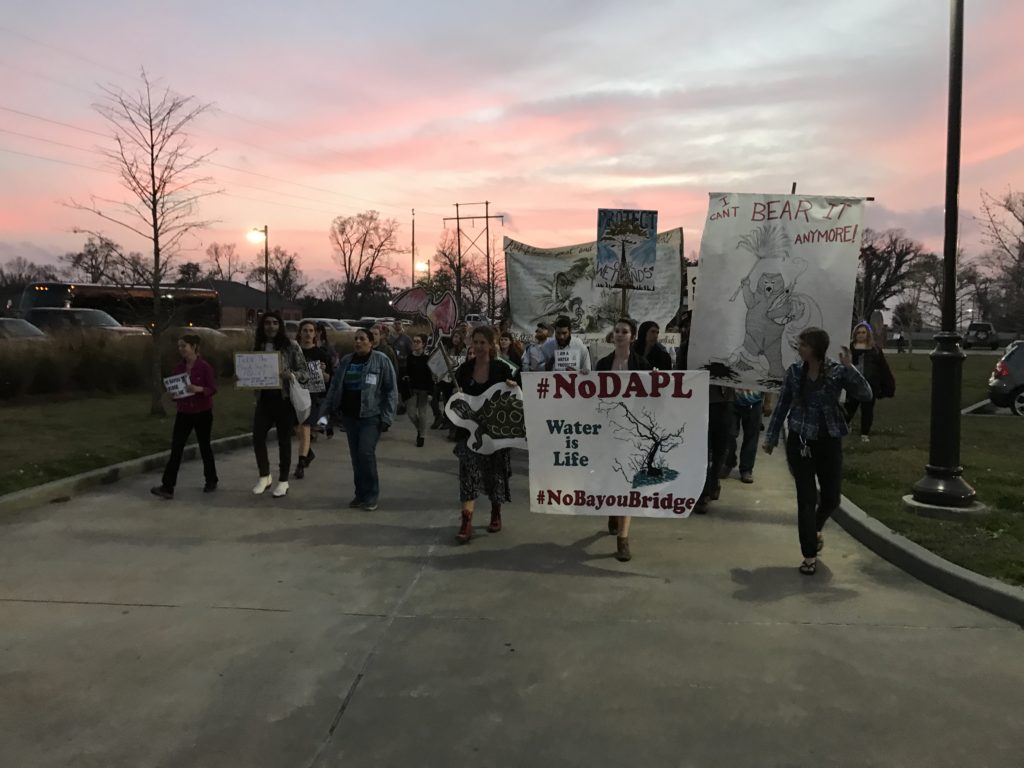 Protesters sign “You Are My Sunshine” while marching into public hearing.

Before the hearing, InsideSources spoke with a number of local residents who were in attendance because they weren’t sure what to think of the pipeline and were there to learn more. In the aftermath of the attempt by protesters to drown out all other voices, the locals seemed excited to be done with the whole ordeal. With trusted speaker after trusted speaker—lawmakers, law enforcement, economists, and others—trying to explain the benefits of the pipeline only to be shouted down by protesters who would not discuss factual evidence, it became clear during the hearing that the protesters have focused their strategy more on causing a ruckus than winning hearts and minds to their cause.

Correction: An earlier version of this article incorrectly stated the Louisiana Bucket Brigade supported an end to oil exports. Ms. Rolfes was only noting that the move by Congress and the Obama administration to end the export ban had led to increased investment in energy infrastructure, which the group does not take a position on.