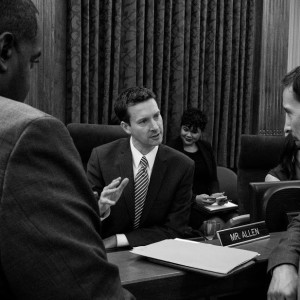 D.C. Council member Charles Allen, a Democrat, says lowering the District voting age to 16 would empower young people in the nation’s capital. But juvenile justice advocates tell InsideSources the councilman’s proposal could have the opposite impact — by putting teenagers at a higher risk of facing adult consequences too soon.

Mistrett worries that a lower voting age could lead to more teenagers charged as adults in the criminal justice system at a time when, “D.C. already locks up too many kids under the age of 18.” The justification would be that an adolescent mature enough to vote is mature enough to face tougher penalties.

“To open that door is incredibly dangerous,” Mistrett said.

DC Lawyers for Youth Executive Director Daniel Okonkwo is against Allen’s proposal on similar grounds. “I would want to see some safeguards in place that would not allow this to be used as a mechanism for lowering the age of criminal justice system jurisdiction, and I just don’t see how you can do that,” he said.

Mistrett, citing other concerns about the legislation, said studies of adolescent brain development show “16-year-olds probably aren’t voting ready yet — that their brains are still developing, they can be impulsive and they’re swayed by groups.”

Mistrett dismissed Allen’s proposal as a distraction from the ongoing fight for D.C. statehood and predicted that congressional Republicans would block any lowering of the voting age.

There’s also a chance Allen’s proposal will be opposed by Democratic Mayor Muriel Bowser. She told reporters, “I certainly would like to talk to the council member about the genesis of that suggestion. I want to learn more before I speak against it.”

For his part, Allen says he was once as skeptical as the mayor sounded, but he’s been struck by how many adult responsibilities 16-year-olds already have. They drive, hold jobs, make medical decisions for themselves and pay income tax, among other things.

When InsideSources asked the council member about the juvenile justice concern, he seemed surprised. “So far, that hasn’t been an issue I’ve heard come up,” he said, suggesting it could be explored if his legislation gets a hearing.

Asked directly why a 16-year-old with the right to vote shouldn’t be tried as an adult in the criminal justice system, Allen said, “I mean, we do charge 16-year-olds as adults in certain crimes. We do treat them as adults.”

Under Allen’s legislation, the District of Columbia would be the first jurisdiction in the country allowing 16-year-olds to vote in federal elections (two nearby Maryland communities, Takoma Park and Hyattsville, already let them vote on municipal matters).

Lowering the voter age in D.C. won’t have much practical impact on federal matters — the city controls only three presidential votes in the Electoral College and only sends one non-voting delegate to Congress. But the move could represent another flash point between the Democrat-run city and the congressional Republicans who control its budget.

This proposal has yet to generated much discussion nationally, but the New York Times in 2012 ran a piece on the subject by Vanderbilt Law School professor Jenny Diamond Cheng. Under the headline “Leave the Voting Age Alone,” Cheng called lowering the age “a waste of time at best” and urged civic activists to focus on “attacking barriers like residency requirements that exclude college students and voter ID laws that disfavor young and mobile voters.”

The professor doubled down on her views in an interview with InsideSources recently, saying “negative political consequences could be greater than the positive ones.” In an email, she wrote that “new research about the adolescent brain has been increasingly influential in pushing back against the earlier trend of punishing juveniles as adults.”

“I worry that lowering the voting age to 16 would undermine these efforts without any possibly compensatory increase in young people’s actual political power,” Cheng added.