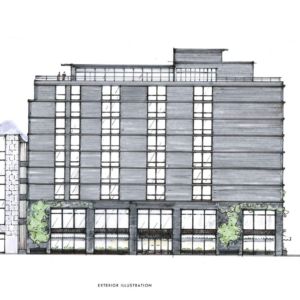 A sketch of the proposed Eaton Hotel in DC. Credit: Gachot Studios
News

Has #resistance gone corporate? A new development in downtown Washington, D.C. implies that it has–and that finding a workspace for so-called changemakers may be significantly more expensive than a cup of coffee. Katherine Lo, daughter of Hong Kong billionaire Ka Shui Lo, released plans to turn the former Sheraton Four Points hotel in northwest D.C. into “a hub for journalists, pioneers and changemakers.” The development will be the second location of her Eaton House “working club,” a co-working space that is tied to a 209-room hotel. Another location is already open in Hong Kong. With Eaton House, Lo is playing to two seeming opposites: consciously catering both to the image of the progressive activist and that of a luxury hotel.

In its public announcements, the hotel presents itself as a mixture of both the exclusive and the radical.

“Eaton House is a dynamic take on a working club for a global tribe of innovators, progressive thinkers and creatives,” its website announces, explaining that the building was created to encourage guests to “congregate around creativity and consciousness-building.”

To pull off these goals, Eaton House will combine elements of a traditional luxury hotel, with rooms designed like pied-a-terres and including a spa and restaurant, with co-working spaces and what it calls “portals for engagement.” These portals include a radio station, cinemas, artist and activist residencies, recording studios, wellness centers, music venues,  and speaker auditoriums. In this, the project reflects Lo’s personal interests in art and film. She has directed one documentary and her artistic taste has guided her father’s Langham Hotel chain in other projects in the U.S.

Both the language and the images of Eaton House’s website stress the connection between the workspace and specifically left-leaning activism. Pictures include shots of the Women’s March held after President Trump’s inauguration earlier this year, and Lo has already said that the Eaton House’s lobby will play a montage of clips from the 2012 and 2016 presidential elections that seek to answer the question of how the country reached the state it is in today.

This activist spirit will continue into the hotel after it is open. Lo has already floated the idea of putting information about how to contact your Congressional representatives into each room’s minibar. When the hotel and workspace are open, they will serve as a community gathering space, Lo says. In numerous press clips she describes how Eaton House will have artists and musicians in residence and that the hotel itself will be a catalyst for good.

“A lot of activists frequently face burnout because you’re constantly working, be it on passing an environmental bill or fighting an anti-war stance,” Lo told Bloomberg News in an interview. “It can be very taxing.”

When speaking about her project, Lo consistently emphasizes her desire for diversity. At the same time, she is clear that by this she expects something more akin to variations on a theme. That is to say, Eaton House and Hotel are not conservative-friendly environments. Instead of bringing together left and right, it is intended to be a sort of antithesis to the Trump Hotel, a gathering of the “woke,” whoever they might be.

Good doesn’t necessarily come cheaply, however. Building and using this space come at a steep price. Great Eagle Holdings, the company Lo runs on behalf of her father, purchased the hotel property in 2014 for $69 million.

Since the hotel has not yet opened, no official prices have been listed. At its Hong Kong location, membership to the Eaton House lounge runs at around $250 per month, while a guaranteed desk pushes the price to more than $750 each month. Other co-working spaces in the District, such as Cove, charge around $190 for a monthly pass. Prices for rooms are expected to be between $250-$300 per night.

Given these price tags, it is perhaps fitting that Eaton House likens itself to Burning Man, where tickets cost more than $500 after taxes and fees, yet sell out within minutes.