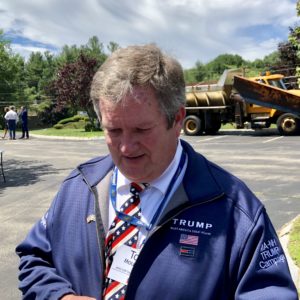 Massachusetts GOP State Committeeman Tom Mountain told NHJournal on Tuesday that Donald Trump would win New Hampshire in 2020 thanks to the weakness of the Democratic contenders, whom he described as “numbnuts.”

Tom Mountain was in Salem, N.H. for an event with Vice President Mike Pence that was canceled when Pence’s plane turned around mid-flight and returned to Washington, D.C. White House Deputy Press Secretary Hogan Gidley told reporters that “Something came up that required the vice president to be in D.C.”

Pence was scheduled to visit an addiction treatment center with Gov. Chris Sununu (R-N.H.) and talk about the link between border security and the Granite State’s ongoing opioid addiction crisis.

“Trump is going to win New Hampshire because the people of New Hampshire have enough common sense,” Mountain said. “In terms of the opioid crisis, they know … the only way to solve it is by having somebody like President Trump continue his program against the opioid crisis by solving the problem at the border.

“None of these numbnuts running for the Democrat ticket have any plan whatsoever to stem the opioid crisis. Elizabeth Warren — you name it. We can go down the list — Beto O’Rourke — they have no plan whatsoever.”

The Trump campaign has repeatedly named New Hampshire as a potential pick-up in 2020, noting Hillary Clinton won the Granite State by just 3,000 votes in 2016. However, the president continues to poll abysmally in New Hampshire, underwater by 19 points in the latest Morning Consult poll and trailing Democrats like Warren and Sen. Bernie Sanders (I-Vt.) in head-to-head match ups.

“In terms of the president being behind in the polls, since when has the Trump campaign cared about polls? If we listened to the polls, we would have been defeated in the last election,” Mountain said.

New Hampshire Democratic Party chair Ray Buckley told NHJournal in response: “This the first I heard there was such a thing as a Republican Chair in Massachusetts. That said, his comments reveal why he was the perfect choice for such an insignificant role.”

The GOP committeeman also said that Massachusetts Republicans were going to focus their grassroots GOTV (get out the vote) efforts on the Granite State, unlike 2016.

“It’s 18 months before the election, and we’re here. We showed up late last time. We didn’t come until after Labor Day in 2016 — we lost by 3,000 votes, and it ain’t gonna happen again,” he told NHJournal.  “Look, out of six New England states, what are we going to win? We’re going to win New Hampshire and northern Maine. We haven’t written off Rhode Island yet, but pretty much that’s it.

“We’re focusing on New Hampshire, we’ve established a rapport relationship with the New Hampshire GOP, and we’re moving up here. We have to win this,” Mountain said.

Nina McLaughlin, a spokesperson for the Republican National Committee, told NHJournal in a statement: “President Trump knows that part of combating the opioid crisis means stopping the crisis at the border – and that’s exactly why he’s mobilized his entire administration in this important fight. Granite Staters are seeing first-hand results in the battle against the opioid epidemic because unlike past presidencies, President Trump is administering resources based on the size and scope of the epidemic, rather than the size of New Hampshire’s population. It is this record of ‘Promises Made, Promises Kept’ that will win New Hampshire for President Trump.”

According to multiple NHGOP sources, their target demographic is blue-collar, low-motivation voters who many in the GOP believe are the key to an upset victory in the Granite State, and Mountain says New England Republicans are going to help get those voters to the polls in 2020.