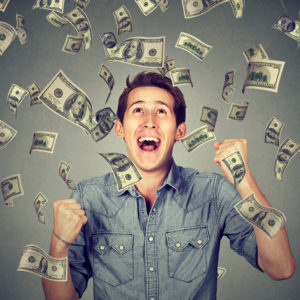 Modern Monetary Theory, or MMT, is all the rage in the halls of Congress lately.

To hear the Progressive left tell it, MMT is not unlike a goose that keeps laying golden eggs. All we have to do is pick up all the free money. This is music to politicians’ ears, but Fed Chairman Jerome Powell is singing a decidedly different tune. Said Powell recently on MMT, “The idea that deficits don’t matter for countries that can borrow in their own currency … is just wrong.”

MMT begins with the government “printing money.” There’s more to it than that, but the effect is to create money that didn’t exist before and to place it in the hands of the government. The government then uses that money to pay for things politicians want.

So here’s the sleight of hand. MMT advocates say that we won’t experience inflation because the U.S. dollar is a reserve currency — foreigners hold lots of U.S. dollars. First, increasing the money supply, other things constant, does create inflation. But when a reserve currency inflates, the pain gets spread around the world instead of being concentrated within one country. In short, MMT advocates believe our government should print money and let foreigners bear some of the inflation pain. Second, there’s no law that says that the U.S. dollar must be a reserve currency. The British Pound was one, but as its value declined, foreigners stopped holding it. Foreigners will stop holding U.S. dollars too as their value declines.

And here’s the bait-and-switch. MMTers say that if inflation does become a problem, the government can simply raise tax rates to soak up excess dollars. In short, the government would print money with one hand, buying whatever it wants and causing inflation. It would then tax with the other, thereby removing dollars from the economy and counteracting the inflation. In the end, all that’s happened is that the government has replaced goods and services that people want with goods and services politicians want.

After a bout of MMT, we might have the same GDP and zero inflation, but what constitutes that GDP would have changed dramatically. Instead of having more cars and houses, we might have more tanks and border walls.

When called on the bait-and-switch, the MMT response is that, as with the private sector, the government’s decisions won’t be flawless. If voters are displeased with fewer cars and more tanks, all they need do is to voice their displeasure. This response ignores nearly everything we know about human behavior in both the private and public sectors. In the private sector, profit and loss feedback pushes businesses to correct errors. In the public sector, the motivation is simply to spend without constraint, errors be damned.

Not surprisingly, Progressives want you to believe that they have found a way around the laws of economics, and that their new path will allow politicians to spend as much as they like. This isn’t economics. It’s magic dressed up in techno-jargon.