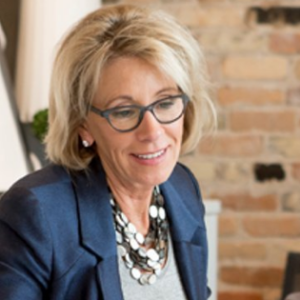 A major union is urging college students at several campuses to protest Wednesday against the new secretary of education.

Education Secretary Betsy DeVos has faced fierce opposition since first being nominated Nov. 23. Labor unions have been particularly outspoken about her. The Service Employees International Union (SEIU) is organizing the campus protests to highlight issues facing the education system, and the administration that oversees it.

“Our nation’s higher education system is in crisis,” a video for the protest states. “Millions of families can’t afford to send their kids to college. Student debt is skyrocketing, and educators are forced to rely on government assistance. With right-wing extremists and billionaire CEOs controlling all branches of our government, our nation’s education system and core values are at risk like never before.”

DeVos is not mentioned by name in the video but is shown when it discusses right-wing extremists. She previously served as chairwoman of the Michigan Republican Party, and she also has business experience as the founder of Windquest Group. DeVos also has an extensive background in education policy. As profiled by InsideSources, she has spent nearly 30 years encouraging reforms to help children escape failing schools.

“We are taking action to take a stand against Trump’s corporate cabinet and to make real change in our higher education system,” a Facebook page for the protest states. “Let’s become an unstoppable force for change in higher ed by creating more opportunity for the next generation.”

President Donald Trump and his cabinet picks have faced constant attacks by labor unions. DeVos has been primarily criticized over her support for school choice and lack of experience in public education. The National Education Association called her dangerously unqualified.

The Senate approved her confirmation Feb. 7. after a heated partisan battle over her credentials. Vice President Mike Pence cast the deciding vote. It was the first time a vice president had to break a tie for a cabinet nomination.

The Facebook page lists about a dozen confirmed campus protests. Boston University, the University of Chicago, and Duke University are among the campuses with planned protests. It also lists a few dozen more colleges where protests might occur.

The protests were scheduled to begin at noon, but some participants got an early start. The SEIU posted pictures of a small crowd in Chicago that began protesting in the morning.

The SEIU did not respond to a request for further comment by InsideSources.