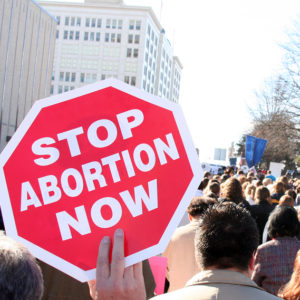 Americans may not call themselves “pro-life,” but a majority support pro-life positions on abortion. According to a new poll by the Knights of Columbus (KoC) and Marist, 55 percent of American adults said they considered themselves pro-choice, but a mere 15 percent said that they supported making abortion accessible to women at all stages of pregnancy.

“As in past years, this poll shows that the pro-choice label on the abortion issue is simply insufficient,” Knights of Columbus Supreme Knight Carl Anderson said in a statement. “The majority of Americans – in both parties – support legal restrictions on abortion.”

To try to get a better picture of what types of abortion regulation voters want to see, the poll avoided asking if they opposed or supported Roe v. Wade, instead posing the question: “Which comes closest to your view of what the Supreme Court should do when it reconsiders Roe v. Wade, the 1973 ruling making abortion illegal in the United States?”

What they found is that a clear majority wanted to leave the the issue to the states (49 percent) or ban it outright (16 percent). Meanwhile 75 percent of American opposed or strongly opposed spending taxpayer money to subsidize abortions overseas (the so-called Mexico City rule) and 54 percent were against using taxpayer money to pay for domestic abortions.

“What we see in this poll is not a polarized electorate, but one with a whole lot of common ground,” said Marist Poll Director Barbara Carvalho in a press call on Tuesday.

Interestingly enough, many of the things Americans supported, like allowing states to outlaw or restrict abortion, would require revisiting Roe.

“Almost two-thirds, 65 percent, would like the Supreme Court to reinterpret Roe in a way that would functionally overturn it,” Andrew Walther, KOC’s communications and government affairs executive, told reporters.

The results show that, for many people, the “pro-choice” label does not signal support for on demand abortion without restrictions. More than six in ten pro-choice voters support limiting abortion to the first three months of pregnancy. The number for self-identified Republicans is even higher (92 percent).

It’s encouraging news for the marchers set to arrive in D.C. for the March for Life on Friday, but an abortion ban remains a far off goal.