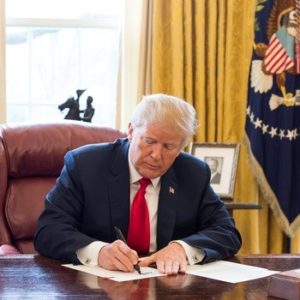 No one knows the future direction of the American economy, but several danger signs are ahead. One is continued inflation at 40-year highs or worse — a cruel hidden tax that eats away wages and savings, with more suffering for families struggling to afford groceries and gasoline. Another is a recession triggered by high interest rates designed to fight inflation. This means job losses, lower incomes, smaller nest eggs as stock markets contract, and even tougher times for businesses reeling from supply-chain shortages.

Yet, President Biden and his allies in Congress still have failed to learn the economic lesson that governments cannot tax and spend their way into prosperity. They keep believing that a brighter outcome is just one more giant deficit-financed program or tax-the-rich scheme down the road.

Fortunately, policymakers have an opportunity to steer the nation in a genuinely hopeful direction by making the Tax Cuts and Jobs Act (TCJA) permanent and working to reduce government spending. States such as Iowa are already well along this proven path with policies of their own, providing better prospects for economic growth and a stable financial foundation.

The Tax Cuts and Jobs Act passed during Donald Trump’s administration and, along with unshackling businesses from excessive regulation, created a strong economy. The tax relief generated by the TCJA benefited individuals as well as businesses. Employment increased, and many businesses offered bonuses to their employees. And contrary to the opposition’s fearmongering, the wealthy have paid more income taxes, and the poor have paid less.

Income levels also increased as many Americans were earning higher wages. “In 2018 and 2019, real median household income in the U.S. rose by $5,000 — a bigger increase in only two years than in the entire eight years of the preceding recovery combined,” wrote economists Kevin Hassett and Tyler Goodspeed, who both served as chairs of the White House Council of Economic Advisers under Trump.

The economic growth generated by the Tax Cuts and Jobs Act brought increased revenues to the federal government. This is often overlooked, and the tax cuts were blamed for causing deficits, while the real culprit was government overspending. Between 2000 and 2019, federal outlays adjusted for inflation rose 69 percent before trillions more were spent during the pandemic.

The Tax Cuts and Jobs Act also showed numerous states how to lower their income and corporate tax rates. This was especially true due to capping the state and local tax deduction, or SALT, at a reasonable $10,000. In 2018, Iowa enacted a comprehensive tax reform measure, followed up this year by the largest tax cut in the state’s history.

Gov. Kim Reynolds signed a tax-reform measure that creates a low individual flat income tax rate of 3.9 percent by 2026 and will gradually reduce the corporate income tax to a flat 5.5 percent. Reynolds has made prudent budgeting and tax reform a priority.

“On the economy, the contrast couldn’t be more stark. While Democrats in D.C. are spending trillions, sending inflation soaring, Republican leaders around the country are balancing budgets and cutting taxes. Because we know that money spent on Main Street is better than money spent on bureaucracy,” Reynolds said in her response to Biden’s State of the Union address.

Critical parts of TCJA that affect business expenses, research and development, small business relief, and low individual tax rates have expired this year or are scheduled to do so in the next Congress. Action in Washington is needed to fix these problems and address other longstanding flaws of the federal tax code.

For instance, last month, Iowa’s senator Chuck Grassley introduced a bill called the Middle-Class Savings and Investment Act, which would allow every taxpayer in brackets of up to 22 percent (about $89,000 for a single filer) to invest virtually federal tax-free. The interest income deduction would increase, as well as the “Savers Credit” for low-income households. Grassley’s legislation is wisely “paid for” by extending the SALT cap.

Reynolds, Grassley and other fiscal conservatives won’t necessarily change the progressive mindset. We’re likelier to see Elvis in the grocery store. But over time, their leadership — and the data — can demonstrate that moderate taxes and spending restraints pave the way to a better future.

John Hendrickson is the policy director of the Iowans for Tax Relief Foundation. He wrote this for InsideSources.com.