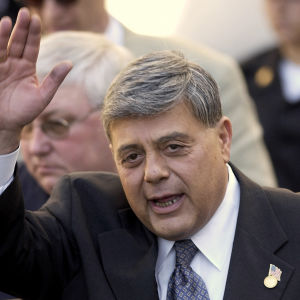 Former Providence, R.I., Mayor Vincent "Buddy" Cianci waves to supporters on Sept. 6, 2002, after being sentenced to federal prison for racketeering conspiracy charges. Cianci was the ultimate political phoenix: a rising star in the national Republican Party cast out of the mayor's office twice (once amid a felony conviction and years later a federal corruption probe) only to emerge from years in prison and return to prominence as a radio talk show host each time. (AP Photo/Steven Senne)
News

What Makes Us Forgive Political Rogues Like Buddy Cianci?

Former Providence mayor Vincent “Buddy” Cianci, easily the most recognizable Rhode Island politician of the past half century, is dead this weekend at 74. He was, in the words of his biographer, as well-known in the Ocean State as coffee milk or Del’s Lemonade.

The Republican-turned-independent was a “Jekyll and Hyde” character — famous for larger-than-life charisma, masterful retail politics and his role in an urban renaissance, but also infamous for resigning office twice after separate felony convictions and serving four years in prison for corruption.

This duality defined Cianci’s life, placing him in a long tradition of American political rogues. North of Providence, Bostonians compared him to their former Democratic mayor, James Michael Curley. In the nation’s capital, Washingtonians saw parallels to one of theirs, Marion Barry.

The truth is that Cianci, Providence’s first Italian and longest-serving mayor, was nothing if not original. Boss Tweed never had his own brand of marinara sauce, and Huey Long didn’t wear a toupee dubbed “the squirrel.” (On that last point, Cianci had more in common with former Ohio Rep. Jim Traficant, whose own elaborate hairpiece was revealed as he too was jailed for abusing the public trust.)

Despite their transgressions, all these flawed men have their defenders — which raises the fundamental question: What makes voters forgive corruption and crime on the part of elected officials?

“People love these lovable rogues, these rascal kings,” said Mike Stanton, author of the definitive Cianci biography, The Prince of Providence. He told InsideSources that many Rhode Islanders saw all politicians as corrupt and credited “Buddy” with at least being upfront about it. They also rewarded the mayor for tireless promotion of Providence and “getting things done” — whatever the cost.

Maybe it’s not surprising. According to Frank Farley, a Temple University psychologist and past president of the American Psychological Association, Americans routinely forgive people they admire as risk-takers — creative innovators who push boundaries in pursuit of grand goals.

“Buddy seemed to have a lot of those qualities,” Farley told InsideSources. “He lived on the edge. He’s almost a textbook case.”

According to Farley, admiration for risk-taking is particularly prevalent in America, and it helps explain the current appeal of Republican presidential front-runner Donald Trump — another colorful political rogue who found success in the high-risk, high-reward world of business.

At the same time, the psychologist acknowledged a more straightforward explanation for the rogues’ resilience: many simply have such magnetic, welcoming personalities that people can’t resist their charms. That’s how Roberta Mudge Humble, an author of books about Rhode Island history and culture, explained Cianci’s success.

“[H]e was extraordinary with people,” she told the Westerly (R.I.) Sun newspaper last week. “People crowded to see him because he had a gift that made us feel that he was speaking just to us.”

Describing her own personal experiences on the radio talk show Cianci hosted, Humble said, “It was as if I had known him all my life.”

Many Rhode Islanders acknowledge an ambivalence when it comes to their relationship with Cianci — it’s complicated.

Stanton was among those who lamented the “sugarcoating” of Cianci’s dark side, including his lack of genuine remorse for his deeds. There’s plenty of evidence of this in the mayor’s memoir, subtitled “How I Prosecuted Mobsters, Rebuilt a Dying City, Advised a President, Dined with Sinatra, Spent Five Years in a Federally Funded Gated Community, and Lived to Tell the Tale.”

In the book, Cianci freely admits to using public power for personal reasons. “It probably wasn’t the right thing to do, but it certainly felt good,” he writes.

This attitude is striking, especially given how his uses of public power were sometimes even more disturbing than presiding over a city hall deemed a “criminal enterprise.”

With the help of a police officer and a city official, the mayor once assaulted a man he suspected of having an affair with his wife. The man said Cianci attacked him with with a fireplace log, an ashtray and a lighted cigarette, although the mayor denied those details.

In light of this, it might seem surprising how many Rhode Islanders loved Cianci unreservedly. But he truly was a phenomenon. As the mayor’s former aide and longtime booster Bill Shields told InsideSources, “Almost everyone [in the state] has a Buddy story, and most of those stories are positive.”

These aren’t memories of crooked dealmaking or vindictive thuggery. They’re of “experiences at the backyard barbecues or the school graduations or the community event in the park where you have the ability to touch people in very, very direct ways,” Shields said. And sometimes those are what make the difference.

By the end of Cianci’s life, a demographically changing Providence did sour on him. Voters rejected his 2014 bid for a seventh mayoral term, handing him only 45 percent of the vote. Even so, his respectable showing was proof that charisma, like good marinara, is a secret sauce, creating bonds with some voters that cannot be easily broken.

Cianci used to say, “In Texas, they have football. In Rhode Island, we have politics.” One thing’s sure: No one played the sport better than he did.