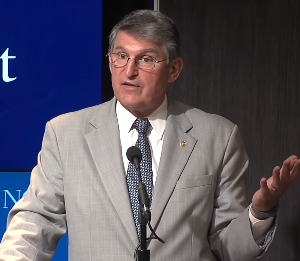 Manchin: Democrats Would “Scare More Americans Off” By Moving Their National Agenda Too Far Left

Less than a week after New York City Mayor Bill de Blasio swung through Washington to promote a progressive agenda for the national Democratic Party, the most conservative Democrat in the U.S. Senate made a pitch for centrism Monday, lamenting the lack of bipartisanship on Capitol Hill.

After delivering a speech at the Brookings Institution on “governing from the middle,” Sen. Joe Manchin of West Virginia told InsideSources that de Blasio and other progressives “have some tremendous ideas.” But Manchin also warned that Democrats “would lose more mainstream Americans” if they moved their national agenda as far to the left as some progressives would like.

“It would scare more Americans off,” he said.

The senator stressed that he shares some progressive priorities with de Blasio and Sen. Elizabeth Warren, D-Mass., including closing the “carried interest loophole” benefiting hedge fund managers and raising the federal minimum wage.

“Elizabeth Warren is a good friend of mine, and we’ve teamed up on a lot of amendments together,” he told the Brookings audience. “But on the other hand, you can’t chastise everybody that’s out there investing and out there trying to get a return on investment and out there willing to take a risk.”

Some of Manchin’s latest priorities, which he outlined in his speech, include legislation to require that congressional budgeting take into account tax expenditures. He’s also planning a bill to revive the federal Office of Technology Assessment, which used to provide Congress with analysis of proposed regulations. (The office was closed by Republicans in the budget-cutting 104th Congress of the mid-1990s.)

“If we had stayed under the Clinton tax rates, we would have been totally debt-free as a nation by 2012. By 2012. We had two tax cuts that came, two wars unfunded, and it just started pummeling from there,” he said.

As a result, the senator said he believes Congress ultimately needs to embrace that which has been politically untenable thus far: comprehensive budget reform, including revenue increases and spending cuts.

“I think what we ought to do is get a bunch of senators who are thinking about retiring, who could care less about getting re-elected, and say, ‘Listen, we’ll be sacrificed. We can sacrifice ourselves.’ And we’ll be the ones who can fix this thing for the next generation,” Manchin said.