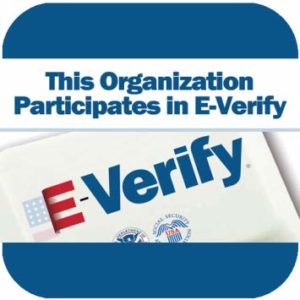 The series of workplace raids — among the largest in a decade — underscores the Trump administration’s determination to crack down on illegal workers. In fiscal 2018, ICE conducted nearly 6,000 audits of suspected illegal workers’ I-9 forms, the paperwork that all newly hired employees fill out. That’s quadruple the number conducted in fiscal 2017, the last year of Barack Obama’s presidency.

Unfortunately, ICE has enough manpower to investigate only a fraction of the 7 million undocumented aliens employed in the United States. Agents need a more scalable solution — one that targets not just those who are working in the United States without authorization but the unscrupulous businesses that hire them.

In other words, agents need President Trump and Congress to make E-Verify mandatory for all employers. Requiring firms to use this free online system to check the legal status of newly hired employees would prevent unscrupulous employers from being able to exploit workers, while boosting wages for Americans.

E-Verify has been around for more than two decades. And it’s easy to use. Employers simply enter in a recent hire’s name, birth date and Social Security number from their I-9 form. The online system then cross-references that information against photo IDs and other data stored by the Social Security Administration and the Department of Homeland Security. In seconds, the system informs firms whether the hire is legally authorized to work.

The system delivers remarkably accurate results. It confirms about 99 percent of workers as eligible within seconds. It gives the remaining 1 percent “tentative non-confirmations” — and nearly nine in 10 of those people are later found to be unauthorized to work.

A few states already require employers to use E-Verify. In those states, the population of recently arrived undocumented immigrants dropped up to 40 percent within a year, according to economists at the Federal Reserve Bank of Dallas and at Agnes Scott College.

However, most states have no such requirements. And there’s no federal mandate, either. As a result, 90 percent of U.S. businesses don’t use the system.

This is a conscious decision for many employers. They know that using E-Verify would cut into their supply of cheap, compliant, illegal labor. Since undocumented aliens are unlikely to complain to the authorities, employers can treat them far worse than the typical American worker.

Businesses often force these aliens to work long hours in dangerous conditions. Eighty-five percent of undocumented aliens have worked more than 40 hours a week without receiving overtime pay, according to a recent poll of workers in New York and Los Angeles.

In Texas, one employer routinely locked alien janitors inside for the duration of their shifts. The employer paid them less than minimum wage and refused to cover overtime, even when the janitors worked six or seven days a week.

When undocumented workers are injured on the job, many employers callously turn them over to the government to avoid paying workers’ compensation. In Florida, businesses and workman’s comp insurers have reported at least 159 injured undocumented aliens to immigration authorities since 2004.

Undocumented workers aren’t the only ones who suffer. According to Harvard economist (and legal immigrant) George Borjas, illegal immigration drives down native-born Americans’ pay between $99 and $118 billion a year.

This is one reason working Americans haven’t seen substantial pay increases in decades. Hourly wages have risen just $2.38 since 1964, accounting for inflation.

Ultimately, employers are the only ones who benefit from this massive illegal workforce. According to Borjas, undocumented aliens add up to $128 billion in value to American businesses each year.

Currently, corporations almost never suffer consequences for breaking employment laws. Only 11 people — and no companies — were prosecuted for hiring undocumented aliens between April 2018 and March 2019. Just three went to prison.

The quickest way to fix this broken system is to make E-Verify obligatory for every single new hire in the United States — and impose strict sanctions on employers who refuse to comply.

For instance, Sen. Chuck Grassley of Iowa and Rep. Mo Brooks of Alabama recently introduced mandatory E-Verify bills that would impose civil penalties on businesses that violate the law. Repeat offenders could incur up to $15,000 in criminal fines for each illegal worker hired and face up to 10 years in prison.

For too long, scofflaw businesses have willingly hired undocumented aliens to cut costs and boost profits. It’s time to hold them accountable.

Mark Thies is the Dow Chemical Professor of Chemical and Biochemical Engineering at Clemson University. He wrote this for InsideSources.com.