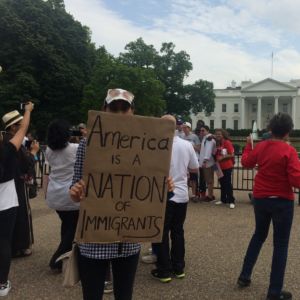 Union: Trump’s Use of Worker Visas Is Hypocritical

President Donald Trump is being denounced as a hypocrite by a national union over recent decisions to deport legally protected foreign workers while his business organization seeks visa holders.

The Trump Organization recently had a request approved to hire 70 foreign workers for its Mar-a-Lago resort. The visa holders are being hired as temporary seasonal workers through the H-2B visa program. At the same time, his administration has been working to deport foreign individuals who have been in the country with a legal status for years, sometimes decades.

Unite Here, a hotel and service workers union, argues that many of the foreign-born individuals have integrated into the country after being here for so many years – and forcing them to leave could break apart families, communities, and rob employers of trained and trusted workers. Unite Here international vice president Maria Elena Durazo notes the president’s use of visas undermines his whole argument those decisions are about helping domestic workers get jobs.

“Trump himself has just either applied or gotten 70 more guest worker visas for his Mar-a-Lago resort, now imagine, what a hypocrisy,” Durazo told InsideSources. “We’re setting up to deport over a million people who are here working, yet you bring in guest workers. That’s the other side of the story we still haven’t gotten out yet, but I think it’s an important piece of this debate.”

Durazo adds the issue also extends to the administration increasing the number of seasonal worker visas generally. The Department of Homeland Security (DHS), which oversees the program, announced July 17 that it would allow 15,000 additional temporary nonagricultural workers under the H-2B program.

The Temporary Protected Status (TPS) program became the most recent target of the administration – with a decision to ended the protected status for Haiti and Nicaragua immigrants. The TPS program allows foreign nationals to stay in the country legally if they are unable to return to their home country safely. Unite Here has been fighting the decision since earlier this year – with hundreds of thousands of people who have been in this country for many years at risk of deportation.

“As you can see in Mar-a-Lago, he would prefer to bring in workers on H2-B visas who are incredibly insecure workers, who will be here very temporarily. They won’t contribute to the country’s economy, they’re not going to buy homes, they’re not going to invest in their communities in the way that these immigrants on temporary protected status do,” Unite Here Local 355 secretary-treasurer Wendi Walsh, who has been at the forefront of the issue since the beginning, told InsideSources. “The humane thing to do is to extend their status and not revoke their legal status.”

Unite Here has argued that ending the protected status for these immigrants is cruel. The union notes that these immigrants have integrated into American society, have had families here, and become part of their communities in the many years they have been here – and deporting them could be disastrous for families, communities, and employers.

The Hill reported earlier in the month that the request to use visa workers for the resort was first made in July. They are being hired to work as maids, cooks, and servers for the 2017-2018 tourist season. The TPS workers, in contrast, have been here for many years, sometimes decades.  Some have had American-born children who would be forced to return to a country they not have never even visited, as the union has highlighted throughout its opposition campaign.

Congressional members from both sides of the aisle have worked together in the hope of countering the decision to ended the protected status for these immigrants from the administration. They introduced a bill Oct. 31 that would allow TPS migrants who arrived in the country prior to January 13, 2011, to claim legal permanent resident status.

The administration has also announced it would end an extension of the Deferred Action for Childhood Arrivals (DACA) program, which was enacted through executive order by former President Barack Obama. DACA protects certain illegal immigrants who came to the country as minors by granting them a renewable legal status.