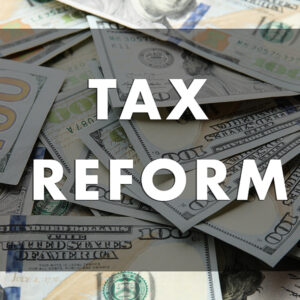 With a possible global recession looming, tax policy has become a point of contention. Now is the time for policymakers to pursue tax reform that promotes competitiveness without compounding the inflation issue.

Workers need more purchasing power, not less. They need tax relief, not a heavier burden. If upward mobility is the key to economic prosperity, tax reform is one way to unlock it for millions of working Americans.

One option is marginal tax reform. Imagine that a government provides subsidies to single parents that increase tax rates on additional work. This is the case for a Japanese single parent who earns $39,981 and faces a 57 percent marginal tax rate. With a small pay increase of $599, she would face a 359 percent marginal tax rate. A Japanese parent who benefits from a government program worth $5,123 might lose 100 percent of that benefit if he or she earns above the earnings threshold.

This is why the marginal tax wedge is relevant for understanding how workers might benefit (or not) from an increase in pay once taxes enter the picture.

While the tax and benefit system can be successful in keeping low-income working households out of poverty and encouraging workforce participation, high marginal tax rates at different earning levels can act as barriers to upward mobility, discouraging people from advancing in their careers.

Very often, these high rates are hidden in complex policy structures. However,  “Marginal Tax Rates and Economic Opportunity,” a recently published study by Archbridge Institute and Tax Foundation, shines a light on the underlying policies that drive the marginal tax-rate spikes that workers are subject to in several countries.

In 2021, a single parent with two children in the United States faced high marginal tax rates due to the Earned Income Tax Credit, Recovery Rebate Credit and Medicare taxes. At 76 percent of the average wage and approximately 95 percent of the median wage, the marginal tax rate for this single parent drops from 52 percent to 34 percent because the EITC ends at this income level. Additionally, when this worker moves up the income ladder to earn $112,688 and their employer increases compensation by just $678 more, the net pay increase for the worker is only $11. This U.S. worker faced a marginal tax wedge of 98 percent due to the phasing out of the cash benefits, the 2021 RRC approved by the American Rescue Plan Act, enacted in response to the COVID-19 pandemic.

Although the EITC can encourage work participation among certain groups, and the RRC was a key safety net during the COVID-19-induced economic crisis, both are imperfect policies as the high marginal tax rates they create can motivate the reduction of hours worked.

Similarly, a Canadian worker could face marginal tax rates that claim 59 percent of additional earnings due to the healthcare premium that Quebec, Ontario and British Columbia provinces levy on individuals. The first marginal tax rate spike occurs at 65 percent of the average wage and approximately 73 percent of the median salary. This could keep some workers in these provinces just below the threshold of earnings that triggers the tax rate spikes. Eliminating these barriers by implementing a unique and lower rate will allow workers access to higher wages without confronting this barrier.

However, these are not the only countries where workers and single parents with children face high marginal tax rates that might deter them from pursuing additional income or working extra hours.

Our study reveals that the French “contribution d’équilibre générale” and Italian local income taxes generate, at certain income levels, spikes in marginal tax rates, resulting in French and Italian workers losing up to  93 and 116 percent of additional earnings. Meanwhile, single parents with two children can face marginal tax wedges as high as 652 percent in Australia and 359 percent in Japan. These marginal tax wedges are due to policies like the Family Tax Benefit and the Parenting Payment in Australia, or the child-rearing allowance and child benefits in Japan.

On the other hand, Lithuania’s and Australia’s tax design for single workers avoids unnecessary tax spikes like the ones observed in Canada and the United States by applying a flat Social Security contribution and a flat or slightly progressive income tax.

Tax benefit policies come with trade-offs that policymakers must consider when planning to reform the tax system. High marginal tax rates might directly influence workers’ decisions about accepting a raise, working additional hours, or deciding to remain on government benefits. In Canada and the United States, the spikes directly affect workers earning less than the average wage.

Reshaping some of these policies to generate a smoother variation of marginal tax rates over different income levels would likely raise the labor supply and encourage the upward mobility of workers. That would unleash economic prosperity at a time when it’s needed most.

Cristina Enache serves as Global Tax Economist at the Tax Foundation. She wrote this for InsideSources.com.