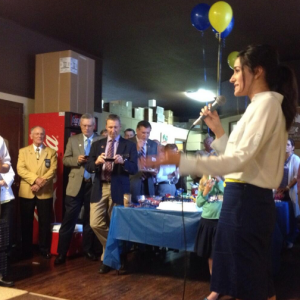 Marilinda Garcia at a recent campaign event (via Twitter)

InsideSources interviewed Marilinda Garcia, Candidate for Congress in New Hampshire’s 2nd District. The Washington Post recently named her a rising star in the Republican Party. We asked her about this and several top energy and tech issues.

INSIDESOURCES: You were recently named to the Washington Post‘s Top 40 Under 40 list of rising political stars. The Post notes that, if you win, the Republican Party will likely look to you as a “voice of the party’s future.” What do you think the GOP is doing right and what needs to change in order to appeal to younger voters?

MARILINDA GARCIA: We have to show the American people that it is actually Republicans that provide organic, innovative, new ideas and solutions that help improve the lives of everyday Americans. It is true that Democrats often achieve short-term, political success using ‘appeals to the heart’ to convince Americans that they are the party of action. But, in reality, they rarely do anything more than recycle their same old, top-down, factory-style methods that grow Washington, D.C.’s power and influence but make New Hampshire and her citizens smaller in the process.

While far from perfect, the Republican Party has proven that it is the clear choice for proponents of limited government, free-market prosperity, and the protection of liberty. These are the values that have made America exceptional.  While Republicans need to do a better job communicating our message, we can never trade these core values in exchange for some quick votes like so many of our friends on the Left do so willingly. Our values resonate strongly with most Americans, and our message can too if we clearly link our core principles to economic opportunity for all Americans, not just a select few.

[IS]: You represent two demographic groups–women and Hispanics–who Republicans have struggled to win in recent elections. How does the GOP need to change its message to appeal to a much broader base?

GARCIA: I am not a fan of telling different groups different things in order to get elected.  Nor do I believe that the central Republican message – small government, low taxation, modest and sensible regulation and bottom-up policies – should be offensive to any.  I believe we must tell our story in an optimistic, upbeat way with a smile on our face.  We haven’t done that very well.  The truth is America’s economic engine has positively impacted all Americans — minorities, women, and young adults included — to produce what we call the American Dream.  Every American has the opportunity to succeed.  That dream isn’t a birthright, though.  It is jeopardized by poor decision-making in Washington.

We have tried it Barack Obama and Ann Kuster’s way: binge spending, bailouts for big business, government-run healthcare, and high taxes.  Americans know we are headed in the wrong direction.  Hispanics, women, all Americans would be better off if we changed course.  We must do a better job convincing Americans that the GOP is, in fact, the party offering new solutions to old problems, instead of repackaging the same tired, old, top-down liberal policies that have failed so badly in so many places.  History is on our side.  We need to talk about it!

[IS]: The EPA just announced new carbon emissions rules for power plants. Meanwhile, Congressional action on energy policy seems unlikely as an energy efficiency bill recently failed in the Senate. What regulatory actions do you believe should be made to reduce carbon emissions, and what role should Congress play?

GARCIA: The solution to our energy problems, and the path to becoming more efficient and reduce our carbon emissions is not through more government regulation that stifles economic activity. Harmful government regulation, such as the cap and trade policies that are supported by Democrats like Rep. Ann Kuster and my primary opponent, only burden small businesses and make energy more expensive for American businesses and families. Instead of promoting more regulation and red tape, we need to be encouraging private investment in companies and individuals that are on the forefront of developing efficient and environmentally friendly technology.

[IS]: Technology policy is at the forefront of the national debate right now with the FCC’s new net neutrality proposal and two mergers, Comcast-TWC and AT&T-DirecTV, that are set to reshape the market if approved. Do you believe that the FCC’s net neutrality plans are moving this debate in the right direction?

GARCIA: American technology has been able to flourish in the last century because of limited government intervention and regulation. The internet has been able to expand exponentially, which has allowed unprecedented economic growth and an explosion of knowledge and information. Using government regulations to dictate how Internet Service Providers (ISPs) treat web traffic will prevent future technological growth and innovation and jeapordize America’s competitive advantage in the technology information sector. Rather than intervening and controlling the behavior of ISPs with net neutrality, we need to allow the free market to dictate what ISPs charge for rates. The demand for internet access is so great that ISPs will not be able to raise their rates or charge higher amounts for different types of service without tremendous backlash. We need to protect liberty and economic freedom in the digital sphere – not using government regulations to stifle internet providers.

[IS]: Do you see these telecom mergers as good for consumers?

GARCIA: I believe that any business transaction that allows a business to be more efficient and effective at delivering a service is good for consumers. The free market has a natural tendency to move in ways that best serve the consumer. These mergers will allow the companies to combine resources, or in some cases swap places, which will deliver more services and a better product to the American people. Additionally, these companies do not operate in the same markets, meaning that the mergers will not eliminate an option for consumers or cause an increase in rates. Government must restrain itself from blocking these types of mergers so as to allow the free market to function properly without intervention. That is the best way to ensure the American economy will thrive and consumers will be served.