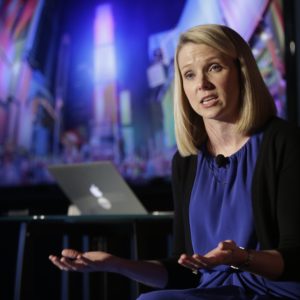 When Marissa Mayer was tapped to take over Yahoo in 2012, it seemed like an argument that women could have it all–career, family, children–and pull off the act with the same sort of style that earned her an interview with Vogue. Now that she has announced her resignation from Yahoo’s board and is expected to resign as CEO after a proposed sale to Verizon is complete, she leaves behind a controversial reputation, with many criticizing her for her failure to turn the company around.

Mayer was an unusual choice five years ago when she was named Yahoo’s new CEO. Not only was she one of the few women working in tech leadership positions, she started her new position while six months pregnant. While some observers were skeptical that she could turn the company around and achieve what Yahoo’s three previous CEOs couldn’t, others tried to present her as a feminist role model.

This was a role Mayer was less willing to adopt.

“I don’t think that I would consider myself a feminist,” Mayer told PBS in 2012. “I believe that women are just as capable, if not more so, in a lot of different dimensions. But I don’t, I think, have sort of the militant drive and sort of the chip on the shoulder that sometimes comes with that.”

While Mayer was happy to talk code, feminist allies found that she was not quite the heroine they were looking for.

Despite having been one of only a handful of women to join a fledgling Google, Mayer’s focus when hiring was ability, not gender. In fact, over the course of Mayer’s tenure, Yahoo’s workplace lost female employees in management. Women currently make up 21 percent of Yahoo’s leadership, down from 23 percent last year. Thirty-one percent of its workforce is female.

Overall, Yahoo’s workforce is smaller than it was when Mayer took the helm. Under a layoff plan announced in February of 2015, the company prepared to let go 15 percent of its workforce, or roughly 1,600 employees.

Slowly, Yahoo investors found that Mayer’s tenure was not the salvation they had been looking for. Soon after beginning as CEO, she began a binge of acquisitions, spending somewhere between $2.3 and $2.8 billion to acquire 53 different companies, emphasizing mobile, video, native advertising, and social media technologies and using the purchases to add talent. After Tumblr, the most well-known of her technology buys, was drastically devalued in subsequent earnings reports, many observers began to doubt the wisdom of the strategy.

When investors saw the company’s quarterly earnings report in July, however, many began predicting that it might be the company’s last. After controlling 20 percent of global web advertising between 2006 and 2008, Yahoo’s marketshare was down to 3 percent and the price-per-ad paid by advertisers had fallen 15 percent from the previous year.

“What is likely to be the last Yahoo earnings release ever will drop just after 1 pm PT today,” wrote Swisher, never a supporter of Mayer’s policies.

“‘Drop’ is exactly the way to put it. Wall Street expects the results from the Silicon Valley internet giant to be another weak one, with revenue down 20 percent and earnings down close to 50 percent from a year ago. Investors could see an upside to those dire results, which is the best one can hope for given the core implosion that has devastated Yahoo’s business for far too long,” she continued.

At the end of July, the company announced an upcoming sale to Verizon for $4.83 billion. It was almost exactly four years since Mayer took her place at the helm, and the company’s stock price had surged 151 percent, from $15.69 to $38.90. Critics noticed that most of that growth came from the stake Yahoo owned in Alibaba.

Many of the same policies introduced with glowing praise in the Vogue article now reappeared in pieces criticizing Mayer’s executive decisions. Whereas Vogue praised her decision to give employees “iPhones instead of BlackBerrys,” the decision later appeared in a 2015 report by hedge fund manager Eric Jackson as an example of corporate waste.

Yahoo spent almost $10 million on the iPhones. It also spent more than $100 million a year on catered meals and sponsored the Met Ball Gala for $3 million, all decisions difficult to justify to shareholders when revenues remained stubbornly low.

The final earnings report of Mayer’s time at the top showed that for all of the heavy spending, Yahoo remained a ghost of its former self, plagued by stories of hacking and lacking particular dominance in any corner of the digital market. It no longer led in advertising, mail, media, or news. Its remaining web properties are set to be sold to Verizon for what was initially supposed to be a paltry $4.8 billion, roughly 5 percent of its heyday valuation in 2000. That number now seems likely to drop further as a result of past security breaches affecting the accounts of hundreds of millions of Yahoo users that had not been disclosed to Verizon.