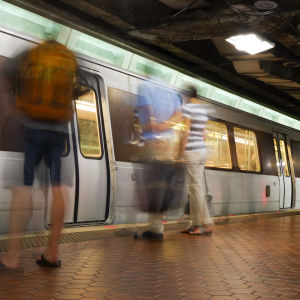 The D.C. Metro has a new leader with a plan to fix the troubled transit system. Now he’s earning praise from top Democratic candidates in Maryland’s 8th Congressional District, just outside Washington.

“Kudos to Metro General Manager Paul Wiedefeld for his aggressive leadership to get Metro moving in the right direction,” said Kathleen Matthews, a former Marriott executive and WJLA-TV anchor, in a statement to InsideSources on Monday. “Tens of thousands of Marylanders who rely on Metro to travel around the D.C. region have lost confidence in the system’s reliability and safety. As a result, ridership and revenues have declined and problems have gotten worse.”

Her words came hours after Wiedefeld delivered his first big public comments since taking over the agency in November.

“We should be, at a minimum, the best transit system in the U.S.,” the former leader of Baltimore/Washington International Thurgood Marshall Airport told reporters at the National Press Club in downtown D.C. He pledged to improve Metro’s safety, reliability and financial management, all of which have come under criticism.

Matthews’ two toughest primary rivals didn’t respond to requests for comment, but both businessman David Trone and state Sen. Jamie Raskin addressed the future of Metro at a Rockville debate hosted by the Montgomery County Sentinel on Saturday. According to the newspaper, Trone called for bipartisan cooperation to secure funding for the system in Congress, something his rivals advocate as well. Raskin praised Wiedefeld’s work in Maryland.

Safety concerns increased last year with multiple Metro deaths. Wiedefeld stressed that “numerically, it’s a very safe system,” but quickly added “that means nothing to the person or the community when they see one of these tragic events.”

He argued that part of the problem is Metro security being absent too often. “I want these officers on the platforms, popping into cars and popping out,” Wiedefeld said. Other problems he spoke about include lengthy track work creating delays as well as broken elevators and escalators.

The comprehensive open letter outlining Wiedefeld’s vision for Metro is available on the agency’s website. That’s where visitors can access the new Customer Accountability Report, an online tool that will track reforms to the system. The dozens of planned changes include:

“Plans and progress will be communicated frequently throughout Metro,” Wiedefeld wrote, “and every employee will be held accountable through specific and measurable goals. As part of Metro’s commitment to transparency, at the end of each year, Metro will enhance accountability by posting results of [Accountability Report] actions and related performance by major departments.”

The first test will be whether riders, elected officials and Metro’s labor unions embrace Wiedefeld’s ideas.