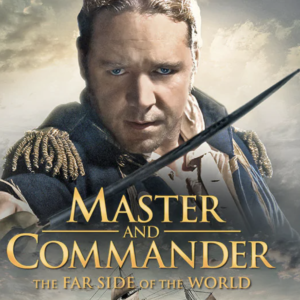 Master and Commander ‘Too Boring?’ A Historian Responds

It’s not the Napoleonic Wars, but a Twitter fight has broken out over the 2003 movie of 19th-century naval combat, “Master and Commander: The Far Side of the World.”

A British musician, Ian McNabb, fired the first shot. “Lots of folk complaining about lack of sleep during the pandemic. May I recommend ‘Master And Commander,’ starring the usually captivating, attention-grabbing Russell Crowe. I’ve never made it past the ten-minute mark. You’re welcome.”

The Australian movie star unleashed a broadside in return. “That’s the problem with kids these days. No focus,” Crowe tweeted. “Peter Weir’s film is brilliant. An exacting, detail-oriented, epic tale of fidelity to Empire & service, regardless of the cost. Incredible cinematography by Russell Boyd & a majestic soundtrack. Definitely an adult’s movie.”

Crowe’s fans took notice—McNabb had the good sense to tag Crowe in his comment.  They have jumped in to defend the film, and pummel McNabb for not appreciating its deep moral lessons about manhood, patriotism, service, honor, decency. An attack on the movie is implicitly an attack on all those things. As a result, McNabb, Crowe, and “Master and Commander” began trending on Twitter.

Not everyone is going to agree on a great movie, or book, or song. I cannot tell you how many times I have read “Moby Dick,” but I have never been able to finish one of the Patrick O’Brien novels on which “Master and Commander” is based. I give director Peter Weir credit for reading at least three of them, as the film is a composite of story elements from different volumes in the series.

I enjoyed “Master and Commander.” I did not find it boring. I cannot say that it reinforced my ideas of manhood, patriotism, service, honor, or decency, as I don’t go to the movies for that. McNabb was not critiquing it for those things, but because he found at least the first ten minutes to be boring  After that first ten minutes, which probably captured the tedium of life at sea, the action begins with Captain Jack Aubrey and the H.M.S. Surprise chasing a French warship around Cape Horn. Men and ships navigating around it experienced many different emotions, but never boredom.

As a Supreme Court justice once said, “What is one man’s comfort and inspiration is another’s jest and scorn.”  Let us hope that manhood, patriotism, service, honor, and decency can be defended against more serious enemies than Ian McNabb’s tweet about being bored. The effect of his tweet seems to have been to send more viewers to evaluate “Master and Commander” for themselves. And if they endure past the ten-minute mark, viewers are in for both a glorious movie and perhaps implicit lessons on those other eternal values.

Is the movie boring? Perhaps. Life at sea often was. Samuel Johnson once said had said that the only men who went to sea were those who could not contrive to get themselves into prison. It was a place for misfits on land, but somehow within the wooden walls of a ship, a captain had to turn them into a unit.  This is one of the great mysteries of the success of Britain’s Navy (as depicted in the Patrick O’Brian novels and the film) and of any successful Naval or merchant vessel of this era.

Molding the men into a crew is the real story of any ship, punctuated by the occasional fight with an enemy or a crisis in navigation. How does a captain do this?  It is one reason, perhaps, why some of the most compelling stories of the sea are of Captains like Ahab, or Captain Queeg in “The Caine Mutiny,” madmen whom we find more believable than a hero like Jack Aubrey, or in the American Navy a Stephen Decatur.

A captain like Aubrey or Decatur has to draw his crew, who come from all parts of the world and all walks of life, together or risk mutiny or disaster. Each man is sacrificing for the good of the rest.  One of the most memorable scenes happens when William Warley is swept off the vessel tangled in the broken mizzentop rigging.  The wreckage is still attached to the Surprise, and the Captain has to choose—save the ship and all its men, or sacrifice Warley. He orders Carpenter’s Mate Nagle, Warley’s friend, to cut the ropes. It sends his friend to his death, but saves the ship.

“Master and Commander” is about manhood and honor, patriotism, and service, and the other values we had long hoped would be timeless. It is also about the sacrifice made by the people who go to sea to serve their country.

Ian McNabb should be thanked for reminding us of this film and the many lessons it contains.

Robert Allison teaches history at Suffolk University and the Harvard Extension School.  He is the author of The Crescent Obscured:  The United States and the Muslim World, 1776-1815 and other books. He wrote this for InsideSources.com.