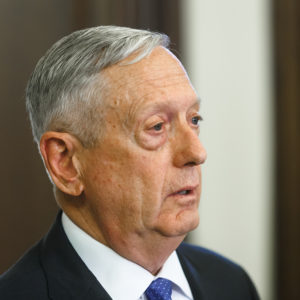 The departure of Jim Mattis as defense secretary this week has grave implications for Korea. If there was one voice of reason, calm and common sense when it came to North Korea and U.S. defense of the South, it was that of Mattis.

I encountered Mattis on his first trip to Seoul and then during a couple of others. He was strong in his belief in the need to be sure of having the troops and resources for defense of the South. At the same time, he went along with the shift in policy under President Moon Jae-in. His response was, give peace a chance.

Talks between Moon and Kim Jong-un, or between President Donald Trump and Kim were fine–but on one condition: Mattis wanted no compromise on denuclearization, on North Korea giving up its nukes or the long-range missiles capable of carrying them to distant targets, and, yes, the facilities for making them.

It would be hard to characterize Mattis as a hard-liner, a war hawk eager to bomb out the North’s nuclear sites or, for that matter, a foe of Moon’s efforts at rapprochement and dialogue. If anything, he saw defense of the South as the way to keep the peace, and he did not oppose moves toward accommodation.

Nonetheless, Trump–who never served a day in the armed forces even though his wealthy father sent him to a military academy for high school–was obviously not at ease with the generals whom he claimed to admire.

Trump did not think to let Mattis know before announcing, right after his summit with Kim on June 12 in Singapore, that he was canceling huge joint exercises with the South Korean armed forces. Nor did he consult with Mattis before saying the U.S. did not need so many troops in Korea, where the number is down to 28,500, and was spending too much on the defense of the South.

It was not until Trump arbitrarily ordered withdrawal of the small U.S. force, about 2,500, from Syria that Mattis broke with him. Mattis was not alone on Syria. All manner of allies and analysts think the U.S. withdrawal from Syria opens the way for deeper Russian and Iranian ties with the cruel regime of Bashar al-Assad, who’s stabilized his grip on power while subduing his enemies or at least holding them at bay.

Without Mattis around, there’s no telling what precipitous decisions Trump will make on Korea. Operating from his “gut,” as he likes to say, he may agree to a severe reduction in U.S. strength as demanded by the North. Or he may end most of the sanctions imposed by the U.S. and UN as punishment for the North’s nuclear and missile tests, conducted most recently in September and November 2017.

If nothing else, Trump may see no harm in signing off on just about any end-of-war statement or peace declaration that Kim thrusts on him on the vague understanding of denuclearization. No one seriously believes Kim is going to give up his nukes while demanding the U.S. also denuclearize. Never mind that the U.S. withdrew its nukes from South Korea in 1991. North Korea sees nukes on U.S. planes and ships based in Japan, Guam, even Hawaii, as more than matching its own arsenal.

Trump has already signaled his gullibility by tweeting on Christmas Day, “Progress being made” and “looking forward to my next summit with Chairman Kim” – the title “chairman” from Kim’s leadership of the ruling Workers’ Party.

The claim to “progress” rests on the first trip to North Korea by Trump’s new North Korea point man, Stephen Biegun, who like any tourist peered across the line at Panmunjom, then talked to South Koreans and Americans in Seoul. Biegun, in four days in the South, let it be known it was fine for South Koreans to break ground for a North-South rail link while the U.S. eased constraints on do-good groups going to the North dispensing food and medicine.

No problem, but Trump chose to ignore a drumbeat of rhetoric from the North taking the South to task for acting too slowly and accusing the U.S. of doing nothing in the quest for reconciliation. Mattis as defense secretary would undoubtedly take a realistic view of the North’s desire to make serious concessions, which is nil.

Trump doesn’t want to hear bad or negative news about his friend Kim Jong-un. Without Mattis around, he’ll be less inclined than ever to consider advice or views contrary to his own happy talk.