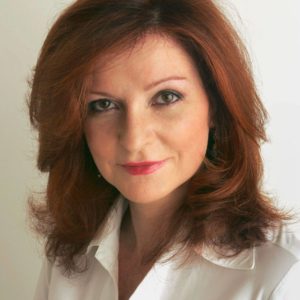 “If this isn’t the most MoDo election in history, I don’t what what is,” the New York Times’ Mark Leibovich tweeted a few months back. He was referring to one of his most famous colleagues, longtime Gray Lady op-ed columnist Maureen Dowd, who’s been writing with wit and style at the intersection of politics and pop culture for decades.

The Pulitzer winner is famous for capturing — and caricaturing — the biggest political personalities. Now, with Republican presidential nominee Donald Trump, she’s hit the motherload of material in her new collection of columns, “The Year of Voting Dangerously.”

Dowd talked about her book Tuesday at Washington, D.C.’s Sixth & I Historic Synagogue, where she offered a wealth of witticisms about the 2016 campaign. Running for president is “the new selfie,” and Trump wields the press like a selfie stick. The way he craves media coverage? Just like Narcissus, drawn to the pool.

Looking ahead to next week’s first presidential debate, Dowd sees a contest between “the King of Winging It” and “the Queen of Homework” — and she’s fully prepared for the absurd.

“He’ll show up, shake hands with her and pull out his industrial-strength bottle of Purell,” the columnist said of the germophobic Trump.

Meanwhile, she thinks Clinton will borrow strategy from an old friend of Dowd’s, the screenwriter Aaron Sorkin, and try to rattle Trump like Colonel Jessup at the end of “A Few Good Men.”

“That’s what Hillary’s going to be going for — to prod him into screaming ‘You want me on that wall!,'” Dowd said.

Throughout her talk, Dowd didn’t shy away from criticizing Clinton as inauthentic, secretive, paranoid and power-hungry, much to the chagrin of some audience members. Still, she suggested Clinton is more likely to win — Trump has alienated too many people outside the white male demographic — even if she worries about the Clintons in the White House again.

“I really think she should tell Bill do the traditional role of the first lady — picking the china and stuff,” Dowd said of Hillary, “because it would underscore how antiquated that job is, where women like Hillary and Michelle [Obama], who have the same educational credentials, have to be in this antediluvian job.”

In her book, Dowd finds more positive to say about Trump than most liberals in the media, but nonetheless called him a “crazy liar” at Sixth & I.

“We had a story in the Times this week where for the first time, I think, we just openly labeled him a liar,” she said. “And this was hard during the lead up to the Iraq War, because no one would call anyone who was exaggerating that a liar. That’s a very hard thing to call politicians at high levels, but he’s earned it.”