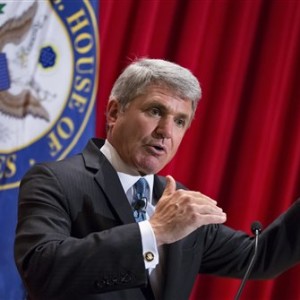 House Homeland Security Committee Chairman Mike McCaul, R-Texas, delivers a "State of Homeland Security" address on the war with Islamic State, the rise of radicalism and the terror threat to the U.S., at the National War College at Fort McNair, in Washington, Monday, Dec. 7, 2015. On the morning after President Barack Obama spoke to the nation about the war on terror, McCaul said that IS members in Syria have attempted to exploit the refugee program to enter the United States. (AP Photo/J. Scott Applewhite)
News

McCaul: Encryption Keeps Me Up At Night

House Homeland Security Committee Chairman Mike McCaul on Wednesday said of all the national security threats facing the U.S., encryption and the threat of criminals and terrorists “going dark” online is the one that keeps him up at night.

“As chairman of the House Homeland Security committee, what keeps you up the most at night?” Kenneth Weinstein, president and CEO of the Hudson Institute, asked McCaul during a national security discussion at the group’s headquarters in downtown Washington Wednesday.

“It’s encryption,” McCaul answered. “It’s this dark, communication space in which the terrorists can communicate freely without our ability to detect it, even if we have a court order.”

McCaul said he’s had frequent discussions about end-to-end encryption with FBI Director James Comey, who’s repeatedly sounded the alarm before Congress in the year-plus since companies including Apple and Google announced the software as the standard for all users, making the companies, by default, unable to comply with subpoenas, search warrants or wiretaps.

Terrorists purported use of the technology to evade law enforcement and intelligence agencies climbed to the top of Congress’ national security agenda after Paris investigators found multiple attackers and plotters used encrypted platforms to communicate while planning the assaults in the French capital last year.

The Homeland Security chairman said eight of the attackers and some 20 co-conspirators responsible for killing more than 100 people on the streets of Paris used applications including Telegram on iPhones to hide their communications. McCaul said due to the lack of warning signs, he knew the Islamic State-inspired terrorists behind the attack used encryption before he was briefed and his suspicions were confirmed (and said as much before the investigators announced their findings).

“I know that as a former federal prosecutor, the way you stop bad things from happening is you get a Title III wiretap or a FISA, you listen to the communications, and then you intervene at the right time and stop the bad act from happening,” McCaul said. “So if they can communicate in darkness, and we can’t shine a light on their dark communications, we won’t have the ability to stop these terrorist events.”

The Texas Republican partnered with Virginia Democratic Rep. Mark Warner last month to announce their intention to create a congressional commission, similar to the 9/11 commission, to facilitate discussion on encryption between the private sector, lawmakers and representatives from law enforcement and intelligence agencies, including FBI, NSA and CIA, to work on a technological solution.

While McCaul said none of the necessary parties are currently talking, Comey has repeatedly told Congress he’s been in discussions with Internet service providers about encryption for the last year, and during his last report to Congress, said the tone of those talks was improving.

After the attacks in Paris and San Bernardino last month, President Obama said his administration would engage in talks with Silicon Valley and announce a new policy proposal on encryption, which reports indicate the White House is poised to deliver.

“It’s a stalemate,” McCaul said. “And I think if Congress forces them to communicate and report recommendations and findings, that’s the best way to do that.”

The chairman added tackling terrorists’ use of social media to inspire homegrown attacks is an essential part of accomplishing the same goal.

“We’re seeing 200,000 tweets per day coming out of Iraq and Syria to do just that,” McCaul said. “We’ve had 79 ISIS-related arrests in this country. It’s hugely significant.”

McCaul criticized President Obama’s State of the Union address Tuesday night for downplaying the threat posed to Americans by ISIS. During the speech, the president said he recognized it’s a “dangerous time,” but criticized the “rhetoric” meant to scare Americans into votes coming out the GOP presidential nomination race.

“The United States of America is the most powerful nation on Earth. Period. It’s not even close,” the president said in his annual — and Obama’s final — address to Congress Tuesday night.

“I’m convinced there are cells we don’t know about that are actively plotting,” McCaul said. “And if we can’t see their communications, then that raises the stakes eve higher.”