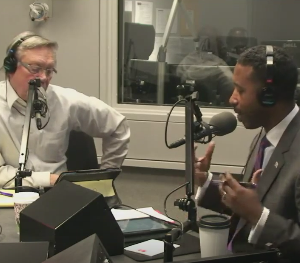 McDuffie Grilled on ‘Friction’ With Bowser Over D.C. Crime-Fighting

A series of summer killings increased concern about safety in the nation’s capital last year, and Mayor Muriel Bowser has been pressing for passage of crime-fighting legislation she proposed in September.

On Friday, she continued to face resistance from a key D.C. Council member who says the District must craft an approach that’s “thoughtful,” not “knee-jerk.”

Judiciary Committee Chairman Kenyan McDuffie, who, like Bowser, is a Democrat, told WAMU’s Kojo Nnamdi Show he wants more data from the mayor on her proposals, including tougher penalties for crimes committed on public transportation and in D.C. parks. Some of what Bowser sent lawmakers, he said, was “not supported by evidence.”

At the same time, the chairman stressed his support for several parts of the mayor’s plan. He backs expanding a current job training program for prison inmates and giving community grants to areas most at risk for crime.

“I want to be able to solve these problems, but I don’t want to do it in a way that is going to contribute to mass incarceration, which has proven to be discredited,” McDuffie said. “If we don’t address the culture of violence, if we don’t address root causes that exist in these communities, we’re going to continue to suffer.”

On Monday, Bowser “played down a question of whether the administration had provided McDuffie with adequate data to justify” stricter penalties for violence on the Metro, according to the Washington Post. “She said penalties are currently higher for those who commit violence against transit operators than against passengers.” She’s calling on lawmakers to give her plans an up or down vote.

This latest back-and-forth over the mayor’s legislation comes as Bowser begins her second year in office. Many observers believe McDuffie would be well positioned to succeed her, though it’s unclear whether he’d run against Bowser if she seeks re-election in 2018.