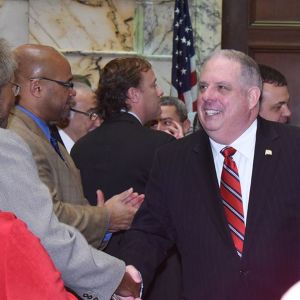 In this year's U.S. Senate race, Maryland Republicans are hoping to replicate the success of Gov. Larry Hogan, who won election in 2014 and enjoys broad popularity statewide. (Photo via Larry Hogan on Facebook)
News

Maryland is among the most Democratic states in the country, but the past couple of years have been good to its Republican Party. The GOP won a surprise victory with Gov. Larry Hogan’s election in 2014, and the governor enjoys a 67 percent approval rating in Gonzales Research & Marketing polling released last month. This makes him one of the most popular governors in the country.

Now Republicans are hoping to build on Hogan’s success by electing the first GOP U.S. Senator from Maryland since 1987 in this year’s race to replace retiring Democratic Sen. Barbara Mikulski. It’s an uphill climb during a presidential election, especially in a state with more than twice as many registered Democrats as registered Republicans, but the governor’s experience has taught political prognosticators a simple lesson: never say never.

“There’s still the possibility, if you look at what Larry Hogan was able to pull off,” said John Bullock, a Towson University political science professor currently running for Baltimore City Council as a Democrat, in a November interview with WBAL-TV.

‘Somebody who’s walked in those high heels’

As the only woman in the Republican field, Szeliga also argued she’s a good fit for an electorate that’s 60 percent female. “I immediately appeal to more than half of the voters as somebody who’s walked in those high heels,” she said.

Whatever her footwear, Szeliga won’t have a cakewalk to her party’s nomination — at least, not without rivals putting up a fight.

‘A new voice, a fresh face’

Chrys Kefalas, the 36-year-old vice president of the National Association of Manufacturers, told InsideSource he’s the candidate to replicate Hogan’s win. A former legal counsel to Maryland’s previous GOP governor, Bob Ehrlich, Kefalas played up the fact that he’s never held office before, just as Hogan hadn’t. Taking a shot at Szeliga, he said “the people of Maryland, whether they’re Democrat, independent or Republican, are not looking for a politician.”

“I think people are looking for a new voice, a fresh face,” he added.

Asked about this quote, Szeliga was quick to fire back, touting her three decades of business experience — including at a construction company she founded with her husband — and hitting Kefalas on his age.

“I started my business when he was five years old, so when he was riding his bike catching bugs I was writing paychecks,” the 54-year-old said. “I’ve only been in office five years, so in no way, shape or form is that a career politician.”

In response, Kefalas issued InsideSources this statement: “I have a forward-looking agenda to bolster small businesses, create jobs, lower taxes and strengthen our national defense. Marylanders know how badly we need a strong leader, proven by their accomplishments, who will fight for our future. And they know we aren’t going to find that in another career politician.”

Szeliga noted that Maryland’s legislators are only part-time lawmakers.

Another disagreement between Kefalas and Szeliga is over supporting Donald Trump as the Republican Party’s presidential nominee. Kefalas has said he wouldn’t back the bombastic businessman if he’s nominated. Szeliga pledges to support whomever her party puts up for the White House. “I can tell you one thing: the Republican nominee will be way better than the Democrat nominee,” she said.

Getting beyond their base

Voters will see more contrasts between these two candidates leading up to the April 26 primary, although Szeliga isn’t participating in Thursday night’s first Republican debate at Goucher College. The Baltimore Sun reported that she’ll be attending a party fundraiser while Kefalas squares off with former Pentagon official Richard Douglas, Greg Holmes, Joseph Hooe and Dave Wallace.

The winner of the GOP race for Senate will face one of the two Democratic members of Congress currently locked in a tight primary fight: Rep. Chris Van Hollen or Rep. Donna Edwards. Their contest is something of a wildcard, particularly because neither candidate has strong ties to the Baltimore battleground.

Kefalas said Republicans also need to compete in places like Baltimore, and in fact the entire campaign will turn on whether his party appeals to voters beyond its conservative base.

“It’s going to be very hard to get more Republican voters to the polls [than Hogan did in 2014],” he said. “The key to this election, with 250,000 or 300,000 more Democratic voters turning out in a presidential year, is doing better than Gov. Hogan did in predominantly Democratic and independent jurisdictions.”

With that goal in mind, Kefalas, who is openly gay, plans to tout his advocacy for marriage equality and service as a speechwriter to Attorney General Eric Holder in President Barack Obama’s Democratic administration. He’s staked out conservative positions on fiscal and foreign policy issues, but plans to stress criminal justice reform and drug decriminalization, hoping to reach minority communities.

With soaring approval ratings for the new Republican governor, and the struggles of recent Democrats, such as former Gov. Martin O’Malley, top of mind, Republicans have a shot to win. Turnout will be key this year in Maryland, which is often accustomed to the Democratic primary taking on more relevance than the general election. Turnout also played an important role in Hogan’s victory in 2014 when Democratic strongholds, like Baltimore, saw a decline in voting.

The question is whether any of that can make a difference. Either Van Hollen or Edwards will be favored in November, according to Irwin Morris, chair of the government and politics department at the University of Maryland. He told InsideSources Hogan’s victory was the result of a series of specific circumstances — an off-year electorate that leans Republican, plus fatigue with eight years of the administration represented by Democrats’ 2014 gubernatorial nominee, Lt. Gov. Anthony Brown.

This story has been updated.