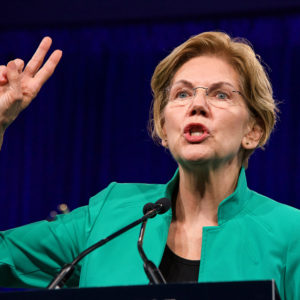 Mean, Angry Men Can Be President, but Not ‘Unlikable’ Women

It was the usual nightmare driving on the Beltway, the six-lane Indy 500 racetrack that encircles the Washington region on a terrifying 64-mile loop through Maryland and Virginia.

I was driving a respectable 64 mph, but cars and pickup trucks raced by at much higher speeds. The worst of them tailgated, tried to force me from their path even when I couldn’t switch lanes, honked long and loud, cut me off, flicked me the finger.

As they roared by to accost their next victims, I noticed what I’ve noticed for years: The ultra-aggressive drivers were all male.

Turns out, there’s hard evidence to support me. Scholars have studied road rage. In one study in the Canadian Medical Association Journal, almost 97 percent of drivers engaging in deadly driving were male, with an average age of 33. Other studies have yielded similar findings.

As it happened, my Beltway horror came as Sen. Elizabeth Warren ended her presidential bid, leaving three white men in their 70s in the race.

Women have led more than 70 other countries, among them Great Britain, Germany, Israel, India, Pakistan and the Philippines. But here in the United States, in a Democratic campaign that started with a record six female candidates, Americans had decided once again that a woman was not “presidential” enough to lead.

Definitions of presidential vary, but the coronavirus crisis is revealing a good one: The ability to make wise judgments in the face of an existential threat to our country.

In the face of this threat, our current president wasted precious weeks before making even sane judgments. Our president-before-last led us into a disastrous war that is still causing destructive aftershocks in the Middle East.

The FBI’s annual Uniform Crime Report raises questions about why we continue to believe that a man is more capable of being president than a woman.

The 2018 FBI summary proves what most of us know instinctively: By overwhelming numbers, men murder, rape, rob and assault much more often than women. Almost 80 percent of the perpetrators of these most violent crimes were male. Each crime sprang from horrendous judgment.

Virtually all Americans tell pollsters they’d be happy to elect a female president. Every year since 1937, Gallup has asked us whether we’d vote for a “generally well-qualified” woman. In January of this year, 93 percent of those questioned said yes — almost triple the 33 percent share in 1937.

Yet in the current campaign of a liberal party that purports to support women’s rights enthusiastically, Warren had a “likability” problem. So did Sen. Amy Klobuchar. So, famously in 2016, did Hillary Clinton.

From LBJ to Richard Nixon to Donald Trump, men can have awful tempers and mean streaks a mile wide, but somehow their “likability” doesn’t keep them out of the White House.

Warren clearly believed that misogyny — animus toward women — was at least partly to blame for her failure, but felt she’d be punished for saying so.

“If you say, yeah, there was sexism in this race, everyone says, whiner,” Warren said in leaving the race. “And if you say no there was no sexism, about a bazillion women think, what planet do you live on?”

There’s some evidence that the Democrats’ intense desire to defeat Trump at any cost hurt their female candidates. They want to choose the most electable nominee and, haunted by Clinton’s narrow, controversial 2016 loss to him, they have apparently settled on former vice president Joe Biden.

“It’s not that voters don’t see a woman doing the job of president, they just don’t think she can win an election to become president,” Stephanie Cutter, President Obama’s deputy campaign manager in 2012, told Politico. “Women are just as likely to cite gender as an electability concern as men, particularly in the race against Trump.”

A November 2019 poll by LeanIn.org, which advocates women assuming leadership roles, had an odd finding: 52 percent of those surveyed said they were “extremely ready” or “very ready” for a female president. Yet only 16 percent believed that other Americans felt the same way.

“If voters don’t think that America is ready, they tend to be less likely to vote for a woman themselves,” Rachel Thomas, the group’s CEO, told ABC News.

Imagine Democrats in 2008 saying they were fine with a black president — but didn’t support Obama because they thought most Americans weren’t fine with it.

Erin Vilardi is founder of Vote Run Lead, which trains women to run for office. She said that when it comes to this year’s failed female candidates, concerns about their “electability” is simply code for bias.