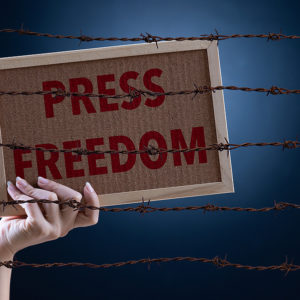 If  “truth is the first casualty,” newsrooms around the world are piled high with the wounded, the dying and the dead.

The whole concept of a truthful, free and objective press has always been more myth than reality, a goal held up by politicians and journalists alike but never remotely realized.

What’s true to one bunch is fake news to another.

The line between truth and falsehood wavers every day in Washington while President Trump accuses his worst enemies in the media of purveying lies, and they fire off editorial barrages that sometimes make their opinion pages look like propaganda sheets concocted by the very dictatorships they so abhor.

That brings us to Hong Kong, once a fairly free-wheeling, quasi-independent entity known for at least an appearance of free speech, including a free press. Not content with having staved off mobs of protesters last year, Chinese authorities have just arrested the media mogul whose carping and criticism was obviously right on target.

Jimmy Lai, his two sons and staff members of Apple Daily were last seen in handcuffs being led out of the paper’s newsroom. All were wearing face masks so it was impossible to detect the sneers and grimaces on their faces, but Lai himself managed to look quite natty in a light summer suit and blue button-down shirt even as his hands were cuffed behind his back and policemen grasped him on either side.

Later, released on bail, Lai as reported by BBC predicted “a long fight” against Chinese repression. Apple Daily, in fact, has not been banned and managed to report extensively on the arrest, but the audacity with which China decided enough was enough for Lai and his closest confederates shows the desire of China’s President Xi Jinping to do away with all who might question his power.

Never mind that China agreed to the concept of “one country, two systems,” when Britain gave up its rule over Hong Kong in 1997. First China sought to assert control with an extradition agreement under which Hong Kong would send those accused of crimes to the mainland.

Shocked by the reaction to that deal, China completed its repudiation of the agreement with Britain by inflicting on Hong Kong a national security law under which it can pretty well do as it pleases and the hell with the troublemakers who once filled the streets protesting Beijing’s heavy hand.

Now other publishers and editors in Hong Kong have to be wondering, what next and how far to go in reporting on the repression of freedom in the former British crown colony whose colonial masters had not always been so democratic and open-minded.

One paper that would seem vulnerable would be the South China Morning Post, an English-language pillar of Hong Kong life since its founding 117 years ago. The paper has an incredibly checkered past, including ownership for a time by Rupert Murdoch, the Australian media tycoon who steered away from critical reporting and commentary on China while negotiating TV deals with mainland authorities.

The South China Morning Post has faced still more sensitive problems since its acquisition four years ago by the Alibaba Group, whose billionaire owner, Jack Ma, is not only China’s wealthiest man but also a member of the Chinese Communist Party. That’s not to say, though, that Ma fancies the paper as a propaganda organ. Rather, it pursues an artful middle ground.

“National security and freedom of the press are not and should not be incompatible,” the paper editorialized after Jimmy Lai’s arrest. The raid on the Apple offices “ensured that Hong Kong’s reputation as a free and open city under the rule of law goes on trial in any subsequent court proceedings.”

That’s not exactly a stirring defense of Lai and his paper. It’s rather like the commentaries in so many other papers around the region. Koreans may not always appreciate it, but Korean newspapers are relatively free in comparison with papers in other countries whose editors are unable to veer far if at all from support of the powers that be.

No matter how much Koreans criticize the South Korean media, the papers still have infinitely more freedom than in the bad old days when censors sat in desks in newsrooms reviewing every article before it went into print.

A free press exists in countries that are healthy, strong and confident enough for leaders and bureaucrats to accept independent papers with the guts to criticize as well as support the system in which they exist.

The death of press freedom in Hong Kong is a blow to the essence of a free-thinking, free-spirited regional center.