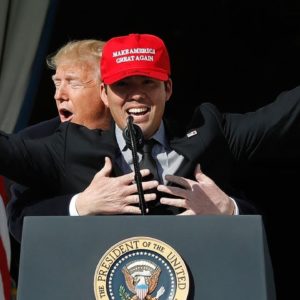 Media’s Message to Trump-Friendly Washington Nationals: ‘Shut Up And Swing’

When Fox News celebrity Laura Ingraham told the NBA’s LeBron James last year to “shut up and dribble” after he called President Trump a “bum” who “doesn’t give a f*** about the people,” Ingraham was attacked for trying to silence political discourse among athletes by sportswriters and Democratic activists.

“We will definitely not shut up and dribble,” James responded.

But after members of the World Series champion Washington Nationals offered kind words to President Trump during their White House visit, some of those same critics are having a “shut up and swing” moment of their own.

“This is an incredible honor that I think all of us will never forget,” first baseman Ryan Zimmerman said, adding, “We’d also like to thank you for keeping everyone here safe and continuing to make America the greatest country to live in the world.”

Nats catcher Kurt Suzuki donned a “Make America Great Again” hat and gave the crowd the “shaka” sign, earning an awkward reverse-hug from Trump. When asked about wearing the MAGA hat, Suzuki said afterward, “It was amazing. That was the president. Just trying to have some fun.”

That was not enough to silence their critics.  Broadcaster Soledad O’Brien called it “pathetic,” and liberal political analyst Bill Palmer called for Suzuki to be kicked out of the game. “If he wore a swastika hat, he’d get banned from baseball — and a MAGA hat is no different,” he said in a tweet. (It was later deleted.)

“The Nationals and MAGA are now linked for as long as people remember this White House visit,” USA Today sports columnist Christine Brennan wrote. “I have covered White House sports visits for 30 years. This was the first time a team made it overtly partisan,” she later added via Twitter.

That claim will come as news to dozens of athletes from the Boston Bruins’ Tim Thomas to the LA Lakers’ LeBron James who’ve used a White House visit to make a political statement in the past. In fact, not only is this not the first time in 30 years, it’s not the first time this year.

Several members of the Washington Capitals hockey team refused to attend the White House visit in March. Braden Holtby, the Caps’ star goalie, declined in order “to stay true to my values.”  And no NBA championship team has set foot in the White House since Trump took office. The reigning champs are the Toronto Raptors so their visit was to the Canadian parliament. But last year’s winners, the Golden State Warriors, skipped the White House and visited former President Barack Obama instead, to make their snub complete.

As of July 1, 2019 twenty major sports teams had won championships during the Trump presidency, but only ten celebrated at the White House, according to BusinessInsider.

None of these previous political statements inspired the same reaction as the Nats’ soft flattery of Donald Trump.

“It takes balls for an athlete to go to the White House, celebrate a championship and have a good time–that’s how crazy things have gotten,” veteran Boston sports reporter Gerry Callahan told InsideSources. “And remember–this is nothing new.”

He’s right. The Boston Celtics’ Larry Bird skipped out on a visit to President Reagan’s White House (“If the president wants to see me, he knows where to find me,” Bird said.) White Sox manager Ozzie Guillen couldn’t fit in a chat with George W. Bush after their World Series win, but he did make time to appear on his friend — and Venezuelan dictator — Hugo Chavez’s radio show.

What’s new is the level of anger directed at any athlete who appears even sympathetic to President Trump and an assumption that athletes attacking him deserve support.

For example, when Megan Rapinoe of the U.S. women’s national soccer team was asked about a possible championship trip to the White House, she responded, “I’m not going to the f—— White House.” She also called President Trump “racist” and “sexist.”

Far from criticizing her for bringing politics to a White House visit, Rapinoe was celebrated for speaking out. NBC News ran a piece calling her “the definition of patriotism.”

The same with US Olympic athletes like Lindsey Vonn and Gus Kenworthy during the 2018 games. When Trump supporters complained about these athletes’ political comments, they were criticized for being critics.

“These anti-American Americans become so rattled by the honest exchange of opinions that their anger gets the best of them. Then they end up treating a once-in-a-generation U.S. sports icon like Vonn as if she were a mortal enemy from the old CCCP.”

Who wrote that about people who criticize political speech? The aforementioned Christine Brennan of USA Today.

“The politically active crowd loves it when athletes take a stand on political matters, but with a huge caveat,” says longtime sports writer and columnist Gregory Clay. “These athletes had damn well better take viewpoints catering to a liberal mindset. A perfect example is LeBron James; the politically active crowd loves him because he blasts Donald Trump every chance he gets.”

Ironically, when James twisted himself into rhetorical pretzels to avoid criticizing China (the NBA’s biggest market) and its treatment of pro-democracy protesters, the star defended himself and his fellow players by declaring “We’re not politicians.” That’s a far cry from refusing to “shut up and dribble.”

“Athletes have figured it out,” Clay told InsideSources. “Have your opinions, but keep those opinions on a one-way street.

“And we all know which way that street runs.”