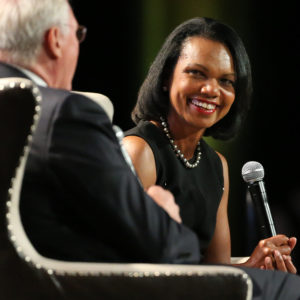 Former US Secretary of State Condoleezza Rice smiles while participating in a keynote conversation with former Ambassador to Iraq and current Dean of the University of Denver's Korbel School of International Studies Christopher Hill, during the annual Korbel Dinner, in Denver, Monday, Sept. 22, 2014. (AP Photo/Brennan Linsley)
[IS] Opinions

Condoleezza Rice broken the mold. Yes, she became the first black woman appointed to the offices of national security adviser and secretary of state, but this mold-breaking experience goes deeper than that.

Rice, now a 62-year-old professor in both the graduate school of business and political science department at Stanford, created a new model for mentorship. She proved that America’s youth, especially young black folk, can bond with role models outside of the comforts of their confined environments.

And that young people can find unexpected advocates, if they think outside of the box. Said Rice, “There’s this notion that we sometimes have, ‘I got there on my own.’ Nobody gets there on their own. There’s always somebody that’s advocating for you, working for you.”

Let’s study Rice’s journey from the segregated South in the 1960s to becoming the nation’s top diplomat in the 2000s. Examine the anecdotes she related during a recent conversation in Washington with David Rubenstein, the billionaire CEO of The Carlyle Group, a global investment firm. On the dais, they discussed her impressive upward mobility at the recent Library of Congress National Book Festival, of which Rubenstein serves as co-chair.

Appearing before a packed audience of 2,500, Rice, author of the new book “Democracy: Stories of the Long Road to Freedom,” spoke of her role models.

They were white men. Older white men. Such as Brent Scowcroft and Josef Korbel.

Rice was born in Birmingham, Ala., during a time when the city was derisively labeled “Bomb-ingham” because of the fire-bombings by the Ku Klux Klan against black establishments.

While she was in middle school, Rice’s parents moved to Denver. She enrolled at the University of Denver one August at age 15 (her birthday is in November) with aspirations of being a classical piano major. However, when she went to the Aspen Music Festival one summer, Rice discovered that there were “12-year-olds who could play from sight everything it had taken me all year to learn, and I thought, ‘I’m about to end up, you know, playing piano bars someplace, or playing while you shop or whatever.’”

That’s when she wondered about a change in major. Rice decided to take a class in international politics. It was taught by Korbel. It ended with a life-changing epiphany.

“And all of a sudden, I knew what I wanted to be,” Rice recalled. “I wanted to study things Soviet, East European, diplomacy, international. And that kicked me then into international politics as a major and, ultimately, as a degree.”

But that’s not all.

As fate would have it, Rice stumbled onto her own version of “Six Degrees of Separation.” In fact, in fewer degrees.

Korbel’s daughter was Madeleine Albright, unbeknown to Rice during her college-student days. Ironically, in 1997, Albright became the nation’s first female secretary of state, serving in the Bill Clinton administration.

Rice graduated Phi Beta Kappa at age 19 on her way to becoming fluent in Russian.

Said Rice, “My role models, and indeed my mentors, were white men. They were old white men. Those were the people who dominated my field. And so I always say to my students now, ‘Your mentors just have to be people who believe in you and who see things in you that you don’t necessarily see in yourself.’”

After leaving the University of Denver in 1974, Rice earned a master’s degree from Notre Dame in 1975 and a doctorate from Denver in 1981. That summer, she was appointed to the faculty of Stanford University as a political science professor.

In 1983, Scowcroft, who previously served as national security adviser in President Gerald Ford’s administration, was vice chairman of Kissinger Associates Inc., an international consulting firm. That year, he gave a speech at Stanford, where he met Rice.

“He got to know me, and he said, ‘I want to get to know you better. I like your work.’ I was sort of getting known for my work on the Soviet military, of all things.

“And so he started taking me to conferences, like the Aspen Strategy Group, and he really mentored me into the field. And I often say there is another lesson in that. We also say, you know, ‘You have to have role models and mentors who look like you.’ Well, it’s great if you do. But, if I’d been waiting for a black female Soviet specialist role model …”

Rice could only chuckle as she uttered that last sentence.

“I’ll never forget,” Rice said. “He called me and he said, ‘This fellow (Mikhail) Gorbachev is doing some interesting things in the Soviet Union. The president’s going to need somebody to help him sort it out. Do you want to come be the White House Soviet specialist?’ And as a result, I got to be the White House Soviet specialist at the end of the Cold War.”

Her career had nowhere to go but up. President George W. Bush appointed Rice as national security adviser in 2001 for his first term, then secretary of state for his second term.

And as for her piano aspirations, well, Rice has played the right keys in that arena, too.

That’s breaking the mold, too.