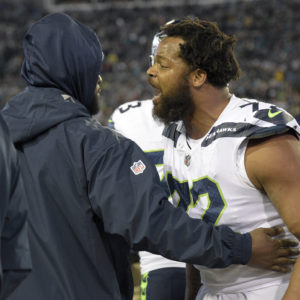 Seattle Seahawks defensive end Michael Bennett (72) is restrained while arguing with teammate defensive end Marcus Smith on the sideline during the second half of an NFL football game against the Jacksonville Jaguars Sunday, Dec. 10, 2017, in Jacksonville, Fla. The Jaguars won 30-24. (AP Photo/Phelan M. Ebenhack)
[IS] Opinions

Michael Bennett Didn’t Get the Memo on the T-Word

We witnessed another inconsistency the other day. And, as usual, it centered on dangerous language. This time, the speaker was NFL player Michael Bennett, who recently was traded by the Seattle Seahawks to the Super Bowl champion Philadelphia Eagles.

During an appearance on Bill Simmons’ sports podcast called “The Ringer,” Bennett offered his assessment of the Seahawks’ team culture, saying, “You need one good guy that does everything right, you know, prays and does all the stuff then goes, ‘Yeah! Let’s go play!’ Then you need some thugs. That’s just how it goes.”

In Bennett’s vernacular, the “good guy” for the Seahawks was quarterback Russell Wilson; the “thug” apparently was running back Marshawn Lynch. And all three parties in this NFL soap opera are black.

Ah, the nuggets we learn regarding the inner sociology of pro sports teams …

Wilson has the reputation of being an upstanding citizen — you know, a very positive person, cultured, erudite, an intellectual type. Lynch, well, he’s known by his colorful nickname, “Beast Mode.” In addition to being a tough, rock ’em, sock’em battering ram of a running back, Lynch was known just as much for his defiant and distasteful antics on the field.

Lynch, who grew up on the rough side of the tracks in Oakland, often grabbed his crotch in the end zone when scoring touchdowns, knucklehead acts that brought him fines and unsportsmanlike-conduct penalties.

Bennett added more juvenile comments, blurting, “You don’t want a whole bunch of Russell Wilsons. You gotta have three or four Marshawn Lynches on your team. At any moment, you never know what they’re going to do. Whether they’re going to come to work or dropkick the coach. You know, Latrell Sprewell (former NBA player who infamously choked his head coach in 1997). You just never know. You can’t have a whole bunch of nice people on a sports team.”

Lynch retired from the Seahawks after the 2015 season, before returning to the NFL with his hometown Oakland Raiders in 2017.

OK, by now, some readers probably are asking a question: Why is this episode even worth a story?

First, one has to examine a little history, beginning on Aug. 9, 2014. That’s when 18-year-old Michael Brown, an unarmed black male, was shot and killed by police officer Darren Wilson in Ferguson, Mo. Many black citizens labeled Wilson a murderer and demanded justice, meaning a prison term for the officer.

But a grand jury in the case declined to indict Wilson, a decision that sparked riots in a widely controversial national case. During all of this unfortunate turmoil, many critics labeled Brown a “thug,” saying he was the instigator of his demise.

That, of course, created an ugly scene, mostly along racial and political lines. Many black social, cultural and political leaders and members of the Black Lives Matter movement declared “thug” a racist word. How can Brown be labeled a “thug” when he was unarmed, they asked.

Many of them iterated it was tantamount to the lightning-rod “N-word.”

Remember, there was an entire national discourse that we saw play out live and in living color on cable television news. Many blacks demanded the “T-word” be locked in a coffin, never to be used in reference to black males, especially young ones such as Michael Brown.

So, case in point: What happened to Michael Bennett? Apparently, he didn’t get the memo. Or perhaps, he determined it was OK for a young, black guy to call another young, black guy a “thug” in a public forum. And that’s with impunity, with an added notch of street cred — even moreso if one commits deviant acts in the process, as Lynch did with the crotch-grabbing.

Suppose Republican Speaker of the House Paul Ryan didn’t get the memo either, and publicly called Lynch, now with the Raiders, a “thug” when he played Ryan’s home-state Green Bay Packers. Or Republican Vice President Mike Pence, when his home-state Indianapolis Colts faced the Raiders.

If Ryan or Pence uttered the “thug” phrase in relation to Lynch, cries of racism, banishment and impeachment surely would reverberate from Los Angeles to Pennsylvania Avenue.

So, shhh … whisper that Bennett can, but Pence and Ryan can’t. Just so everyone knows.

National sports columnist Jason Whitlock, co-host of the talk show “Speak for Yourself” on FOX Sports 1, termed Bennett a “poser,” which, in this context, means a black guy raised in a middle-class environment who goes out of his way to act as if he’s from a lower-class, anti-social background. The practice seems more common among black athletes and rappers.

In Donald Trump’s lexicon, Michael Bennett would be “fake news.”

Just as some socio-cultural observers surmised that Yoko Ono broke up the Beatles in the music business nearly 50 years ago, some sports analysts surmised that this apparent “nice guys” vs. “thug guys” feuding mentality caused the breakup within the Seahawks, a Super Bowl-caliber franchise.

The Seahawks appear to be purging their locker room of loudmouths and strong personalities, such as Bennett, who also was indicted by a grand jury on Friday when he was charged with injury to the elderly. He allegedly shoved a 66-year-old paraplegic woman, reportedly spraining her shoulder in the process while she worked crowd control as a stadium employee after Super Bowl LI in Houston in February 2017.

Bennett also reportedly cursed at police — while blasting “I’m going onto the field whether you like it or not” — when that employee denied him access at a designated closed entrance in his rush to gain entry to the field after the game (his brother Martellus played for the victorious New England Patriots).

During the weekend, social media fervently lit up along the usual racial and political fronts — with liberal black folk claiming Bennett was targeted by a vengeful police force upset because of his NFL-game protests during the national anthem; and with white conservatives labeling Bennett a race-baiting fraud with an attitude of entitlement.

Perhaps, along the way, this sort of intra-racial class warfare will end within the Seahawks. And, eventually, we will learn the results of a peculiar situation that has the feel of a grand and intriguing sociological experiment.

Bennett also played the “misunderstood” game, crying, “Oh yeah, man. Marshawn’s personality is so big and he’s one of those dudes, he’s really like (1960s singer) Nina Simone: He’s just misunderstood. People misunderstand him all the time. He’s such a great guy when it comes to doing community. He’s such a great teammate. He shows up to everybody’s thing. He plays hard. When he practices, he practices hard.

“So when he left (the team), you could feel it. He was just that guy that had swag that made the Seahawks feel like a different type of team.”

Apparently, that “swag” is the “thug” mentality. But, remember, everyone can’t say that.