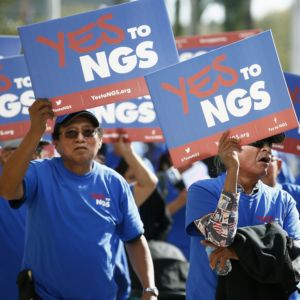 Editor’s Note: This version of the article clarifies the NGS expected operations under the new plan and tribal revenues.

In the words of the Rolling Stones, you can’t always get what you want, but if you try, you can get what you need. That seems to be the case with the Navajo Generating Station, which has been trying to find a new buyer with a plan to keep the power plant open after 2019. On Wednesday, Middle River Power, a Chicago-based company, presented a plan that would keep the Navajo Generating Station open by running it at a reduced capacity during off-peak demand. Reducing capacity would help the plant to remain open, but would also mean lost jobs in the area.

Although many of the details in Middle River Power’s plan are covered by a nondisclosure agreement, Joseph Greco, a senior vice president, told Arizona state regulators earlier this week that they intended to operate the Navajo Generating Station at a reduced capacity. The plant would operate differently during peak and off-peak hours, to both ensure a stable power base and make the plant more economical. The bottom end of this range would be 44 percent of its current output, but the station would often operate at a much higher capacity, such as during peak summer demand.

“We believe there is a solution to be made,” Greco said, when announcing the plan.

The power plant was originally projected to remain in operation through 2044. Its present owner will shutter it by 2019 if no new buyer is found. Even if Middle River Power purchases the plant, it is uncertain how much longer it would remain open, especially since the Central Arizona Project (CAP), a major water infrastructure project which was a main customer of the power plant, voted in June to explore alternate sources of power. The Navajo Generating Station has struggled to compete with low natural gas prices, though supporters say that it would be able to make efficiency gains if it began operating at higher capacities.

CAP has said that it is open to buying power from the plant in the future, as long as it is price-comparable to other sources. They have framed the issue around cost-effectiveness for their customers. But this could still allow for a significant portion of CAP’s power to come from NGS.

Both the Hopi and Navajo tribes have spoken positively about Middle River Power’s proposals, saying that they are hopeful a solution can be found. The Navajo Generating Station and the Kayenta Mine which fuels it provide hundreds of high-paying jobs to tribe members, as well as around 85 percent of Hopi tribal revenues and 22 percent for the Navajo. Even more than that, tribal elders have praised the power plant for supporting local business and helping to preserve tribal culture by allowing families to stay in the area.

“The economic security of the Hopi Tribe is not merely about money, it’s about stewardship – protecting the future and welfare of all who live in our communities,” Hopi Tribal Vice Chairman Clark W. Tenakhongva said earlier this summer.

Keeping the plant open has become a campaign issue for Arizona’s First Congressional District. Heading into the August 28th primary, Republican candidates looking to unseat the sitting Democratic representative have proposed several policy changes to help keep the plant open. Tiffany Shedd proposed changes to facilitate exporting coal from the mine via rail, while Steve Smith supported a proposal from Rep. Paul Gosar (R-AZ), to legally require the CAP to purchase power from the plant.

The Interior Department, which owns a 24 percent share in the project, has been pushing for something similar. According to emails obtained by E&E News, the Interior Department was asked by Peabody Energy, the company that runs the Kayenta Mine, to push the CAP to continue to purchase the plant’s power. Before the Central Arizona Water Conservation District meeting this summer, the Interior Department did contact the district. The Interior Department argues that when Congress agreed to fund the construction of the CAP, which carries water from the Colorado River to Phoenix and Tucson, it intended that CAP should buy Navajo Generating Station power.

The Salt River Project, which currently owns the Navajo Generating Station, is working to find new positions for the workers who will be displaced when the plant closes. The company told AP that so far 140 of their 443 employees had left for new jobs in the company.