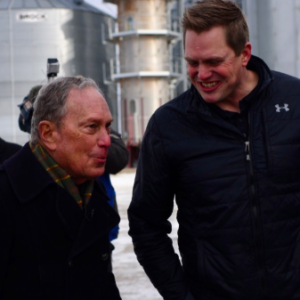 As mayor of New York City and a philanthropist, Michael Bloomberg emerged as a world-renowned activist on climate change, winning accolades from heads of state, the Sierra Club and many others. And, until recently he was not shy about discussing the central role that nuclear power has in reducing carbon emissions, a view shared by President Obama and Hillary Clinton.

It appears the once brash innovator on Wall Street and independent, outspoken mayor is now more concerned about being in lockstep with the Green New Deal movement. That is a big mistake from a policy and political standpoint. Bloomberg would be better served returning to his roots.

Bloomberg’s support for nuclear power has been longstanding and audacious.

During a November 2015 Council on Foreign Relations forum about climate change, he said to Council president Richard Haass, “Nuclear makes a lot of sense.” Bloomberg pointed out the widespread use of nuclear power in Germany, France and “lots of other places” and chided New York governor Andrew Cuomo for pushing to close the Indian Point nuclear plant near New York City.

As mayor, he supported the continued operation of Indian Point, which provides 25 percent of the city’s power. Bloomberg commissioned a consulting study by Charles River Associates that found carbon emissions would spike if the plant closed.

He was even outspoken of the benefits of nuclear power after the Fukushima accident. All this led to fights with Cuomo and some environmental groups, which Bloomberg then was able to tough out.

There is simply no credible way to address climate change without keeping and expanding America’s nuclear power generation. And with many coal plants continuing to be retired, 24/7 consistently generated nuclear power is important for grid reliability.

In October 2019 the U.S. Energy Information Administration reported that nuclear accounts for 53 percent of America’s non-emitting electricity. Hydro plants, most of which were developed decades ago, account for 19 percent.

Further, nuclear plants are bought and paid for and typically able to generate low-cost electricity. The capital expenses for vast renewable generation are substantial and will be especially burdensome to the poor.

Rather than trying to hide from his previously strong support of nuclear power, a fool’s errand in the digital age, Bloomberg should double down on nuclear by emphasizing the following.

—Remind voters that, like other progressive world leaders, he sees nuclear as a practical alternative. For starters, Bloomberg can point to Canada, which has a strong nuclear power sector that is being revitalized. According to Prime Minister Justin Trudeau, “The Canadian electricity sector — with low carbon emission nuclear generation … is one of the cleanest in the world.” France, Sweden and China are among the countries relying on nuclear power for lower emissions.

Unfortunately, the U.S. position as a worldwide leader in exporting nuclear power plant technology has been declining. It is important to change that for economic and national security reasons. Otherwise the rest of the world, which is not shying away from using nuclear power, will be dependent on China and Russia for nuclear technology, already a disturbing trend.

There has been a plethora of advanced nuclear reactor research. These programs, many of which are supported by the U.S. Department of Energy, could lead to large-scale, affordable emission-free power. It is important for this work to continue.

—Explain that it strengthens national defense. As the U.S. modernizes its nuclear fleet, especially submarines, a strong civilian nuclear sector ensures that key services will be competitively available to the Department of Defense. A healthy American nuclear sector provides the U.S. military with quality products at an affordable price.

For economic and environmental reasons, including addressing climate change, nuclear power has a critical, even indispensable role to play. Mike Bloomberg knows that and should not shy away from the strong and principled stands he has previously taken.