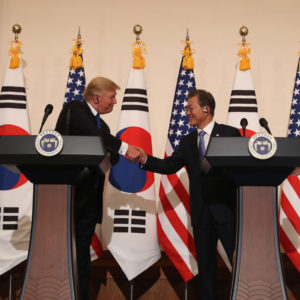 A Missed Opportunity in Korea for Trump

SEOUL – At least he gave it a shot. He really wanted to make it up to Panmunjom but was turned back by the weather.

For most visitors, the fog that hung over the line between North and South Korea would not have been too much for a beautiful U.S. Marine One helicopter to navigate.

It wasn’t as if there were high winds or a terrific downpour. The passenger in this case, however, was the president of the United States. Nobody wanted to take the remotest chance on the helicopter going down with the Trumpster himself on board.

If anything should happen to him, who would believe for a moment that he wasn’t the victim of some terrible North Korean plot? Just imagine the rumors and “reports” that would have been circulating — not just right away but for years to come.

As it was, having not succeeded in what would have been a surprise, unannounced sortie to the Demilitarized Zone, Donald Trump showed up on time, two hours later, Wednesday at the National Assembly. The speech was all over television, on Korean and international channels, in Korean and English.

All that was missing was a line to the effect, “I have looked inside North Korea and seen the evil of the regime.”

It’s possible to interpret what he wound up saying in quite different ways. One interpretation that I would dispute, after also hearing him standing beside President Moon Jae-in in their briefing at the Blue House the previous evening, was that he was showing a more moderate position or that he truly believed negotiated accommodation with North Korea might be possible.

Don’t count on it. The Trumpster, after going through pleasantries and praise for South Korea’s accomplishments, in his Assembly speech launched into one of the most all-around denunciations of North Korea that I have ever heard. OK, we’re all aware of the many reports on North Korea, ranging from rape to executions to starvation, but rarely do we hear them all summarized in one non-stop denunciation.

What is Trump trying to get across? Does he think he’s preparing South Koreans, like Americans, for war, or at least for a limited strike on North Korea’s nuclear and missile complexes. Or is he saying North Korea gets one more chance, then, bang, Armageddon?

The speech was well organized, carefully crafted. He got to the point toward the end, climactically, dramatically. “The time for excuses is over,” he declaimed. “Now is the time for strength. If you want peace, you must stand strong.”

Yes, that was an applause line, but looking down from the spectators’ seats on the Assembly members at their desks below, I could not help but notice that not everyone was clapping. Although Assembly members were uniformly polite in applauding as he was introduced and then as he was leaving, clearly not all of them were on board with what some saw as a possibly dangerous policy.

It could have been his allusions, both in the press briefing and in his speech, to those three U.S. aircraft carriers, plus a nuclear submarine, lurking in nearby waters that showed he had not given up on “the military option” or a “pre-emptive strike.”

No, the Trumpster did not use either of those stock phrases, which President Moon doesn’t like all, but he might as well have when he talked about the carriers with F35s and F18s on their decks. Most Assembly members did applaud when he concluded that riff by declaring, “I want peace through strength.”

Left unstated was how that strength might be used — as a threat, an act of intimidation, or in a real shooting war. It’s dead-certain that Trump discussed the odds with Moon, but we will probably have to wait a while before getting the full unexpurgated version of their summit conversation.

Moon himself appears eager to get along with Trump — but not to the extent of joining in rhetoric that he believes would ruin any chance for serious dialog with the North. Words aside, he evinced his support for the U.S.-Korean alliance by joining Trump on his visit to the new U.S. headquarters complex at Pyeongtaek, south of the capital, and then waiting in vain for him at Panmunjom.

Did the Americans really have to call off Trump’s visit to the DMZ? Looking a weather reports, why did they not arrange for his motorcade to take him there by road rather than rely on a helicopter? What a photo-op that would have been — the two of them shoulder to shoulder, staring across the line into the jaws of the tiger!