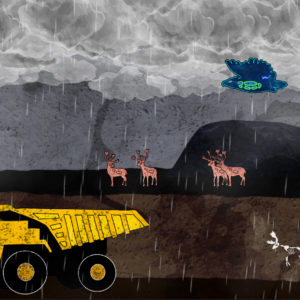 A screenshot from the Thunderbird Strike game.
News

Protest can take many forms, from petitions to occupation and civil disobedience. But a video game might be new territory. Michigan State University professor Elizabeth LaPensée has recently launched a game that would allow “indigenous players” to regain a sense of agency around oil pipelines. Called Thunderbird Strike, after the thunderbird, a figure in Native American mythology, the game allows players to adopt the persona of the thunderbird to protect the environment of “Turtle Island,” a native name for the earth. As the character of the bird flies, it gathers energy, which it can later release in lightning strikes targeted against the Enbridge Line 5 pipeline, depicted as a snake in the game’s final level.

The invocation of the thunderbird imagery ties LaPensée’s game to the native environmentalism protests that gained popularity after Standing Rock. In myths from several Canadian and Native American tribes, thunderbirds are magical creatures that return to save the earth from a snake that will swallow the world. Protesters adopted the snake as an image of corporate greed. Thunderbird Strike makes the comparison more explicit, having players target the Enbridge 5 pipeline specifically.

Enbridge Line 5 runs for 645 miles between Superior, Wisconsin to Sarnia, Ontario, Canada, passing under the Straits of Mackinac in the Great Lakes. The original line was built in 1953 and supplies more than 55 percent of Michigan’s propane needs. Even though the line was built to exceed safety standards and has never suffered a leak, it has been the subject of recent controversy. Activists in Michigan are attempting to push the state to order the line decommissioned.

LaPensée, a professor of media studies who is of mixed Anishinaabe, Métis, and Irish heritage, unveiled the game at the imagineNATIVE Film + Media Arts Festival, where it immediately began to attract controversy. The Thunderbird Strike website includes a section entitled “Act,” which provides information about Enbridge Line 5 and the potential damage a leak in the pipeline could cause. It also provides players with six options of how to care for the waters, including self-education, protest walks, divestment, and speaking out. LaPensée stresses that even though the game allows players to zap trucks, oil pipelines, and drilling structures with lightning bolts, it isn’t advocating eco-terrorism.

Supporters of energy development disagree, however. They find it disturbing that a game that advocated the destruction of a pipeline was able to receive grants from both Michigan and Minnesota.

“It’s bad enough that privately-funded eco-terrorists encourage this kind of behavior, but it’s way over the line when a public university getting our tax dollars joins in the effort,” said Toby Mack, President of Energy Builders, a community-based coalition of workers and businesses in the energy supply chain.

In addition to money from Michigan, LaPensée received a grant through the 2016 Arts and Cultural Heritage Fund in Minnesota. According to the Minnesota state constitution, the $3,290 fellowship is intended for arts and arts education to preserve Minnesota’s history and cultural heritage. That LaPensée was awarded this money without living in the state is shocking to state Republican lawmakers.

“It’s disappointing to learn that our tax dollars were used by someone who not only moved out of our state but on a project that has zero benefit to Minnesota,” said State Representative Bob Gunther, who chairs the Minnesota House Legacy Funding Finance Committee. “Common sense would tell you our arts dollars should be spent on programs that serve some purpose to the State of Minnesota, not on an out-of-state video game that blows up oil pipelines.”

He is moving to sponsor a bill increasing oversight of the cultural heritage fund, specifically stressing that art must be completed in Minnesota and be consistent with constitutionally directed purposes.

Minnesota is not the only state looking to distance itself from the project. In earlier versions, LaPensée’s website said that the game was developed “in affiliation with” the university’s Games for Entertainment and Learning Lab. She has since amended the site to merely thank the university. The Michigan computer lab that developed the game was financed in part by NASA and the National Science Foundation, although neither of these groups provided direct funding for the Thunderbird Strike game.