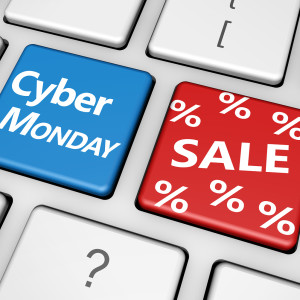 As Americans click to Cyber Monday sales across the web, more of them will be subject to online sales tax than ever before this holiday season, as websites, states and presidential candidates all push for sales tax in the digital domain.

That’s in large part due to efforts over the last year by Amazon.com — the No. 1 online retailer in the Internet Retailer 2014 Top 500 Guide, and the ninth-largest retailer in the U.S. overall according to the National Retail Federation, with $49 billion in sales last year.

In February Amazon added Illinois to its then-list of 24 states where the site collects and remits state sales tax — leaving only Ohio and Michigan of the U.S.’s 10 most-populous states off the list. Ohio followed Illinois in May, and Michigan in October, wrapping the largest state populations into the online sales tax fold in time for the biggest online shopping day of the year Monday.

A number of the above-named states and more have or are considering laws mandating online retailers without a physical presence in their states collect and remit sales tax to state governments — an attempt to collect revenue state legislators claim they’re entitled to, while leveling the playing field between brick-and-mortar and online retailers.

Though the Supreme Court sought to settle the issue in 1992 by ruling in Quill v. North Dakota that retailers without a physical presence in a given state weren’t required to collect sales tax, states like Colorado have since adopted legislative loopholes around Quill. In the Centennial State, online retailers must report their sales and send the results to the state and consumers, after which the state taxed buyers directly (the law has since been suspended pending a court challenge).

Much of the uncertainty stems from years-long stagnation on the issue in Congress, where lawmakers disagree on whether to apply sales tax to online transactions, and how to do so. In one camp, lawmakers led by Virginia Republican and House Judiciary Chairman Bob Goodlatte want to tax consumers based on the location of the seller, the revenue from which would be divided up by a multi-state clearinghouse.

Legislators lining up behind Utah Republican and House Oversight Chairman Jason Chaffetz want taxes to be based on where the buyer lives via the Remote Transactions Parity Act — the method adopted by the Senate in 2013 via the Marketplace Fairness Act, passed under then pro-online sales tax Majority Leader Harry Reid.

Current Majority Leader Mitch McConnell and other anti-tax conservatives oppose any online sales tax, as did former Speaker of the House John Boehner, whose home state of Ohio is pushing to use revenue collected from online sales tax to offset other tax cuts — a measure 2016 Republican presidential contender and current Ohio Gov. John Kasich signed off on as part of the state’s two-year budget in 2013.

Newly-elected Speaker Paul Ryan’s home state of Wisconsin will do the same, according to former 2016 Republican presidential candidate and current Wisconsin Gov. Scott Walker, who said the tax would bring in an additional $95 million in revenue to offset Wisconsinites’ income taxes. While chairman of the House Ways and Means Committee in 2013, Ryan himself said he supported the “concept” of online sales tax, but not the Senate’s take on it.

Two other Republican White House contenders, New Jersey Gov. Chris Christie and former Florida Gov. Jeb Bush, have endorsed some form of online sales tax, with the latter bringing it to the national stage during a conference call with the National Federation of Independent Business members last week.

“A solution that recognizes that the Internet is here to stay and that there is an increasing disparity, and so long as its not used to raise revenue for governments that parity would make sense,” Bush said. “I think there’s just a compelling argument to be made. It may not have been as compelling 10 years ago when Internet sales were significantly lower, but now it’s an increasing part of the sales mix and brick-and-mortar companies, businesses do have significant role in our communities.”