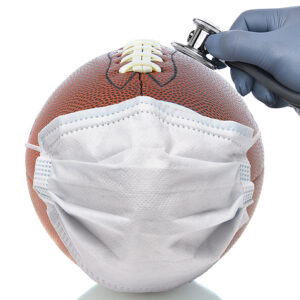 The NFL hierarchy recently issued a directive that made many observers go “Wow.”

In a nutshell, the NFL informed its teams that COVID-19 outbreaks among unvaccinated players could lead to forfeited games.

And those very same teams could be responsible for any financial losses.

Within minutes of the announcement, star NFL wide receiver DeAndre Hopkins of the Arizona Cardinals tweeted: “Never thought I would say this, But (sic) being put in a position to hurt my team because I don’t want to partake in the vaccine is making me question my future in the @NFL.”

Oh really? How ridiculous to even consider forfeiting a multi-million dollar contract because of opposition to a vaccine, even one that has clearly exhibited a high efficacy rate.

And it’s free. Imagine CVS and Walgreens handing out all this free stuff.

As for all of the fears based on racial demographics and the trepidation tied to conspiracy theories, Dr. Myron Rolle  — former Florida State football star, Rhodes Scholar, NFL player, and currently a Harvard-trained neurosurgeon — offered a bit of sanity to the voluminous crazy talk.

Rolle, who is Black, told CNN: “The thing that keeps coming up, especially with Black and Brown players, is the experimentation of Black individuals in that particular demographic in the past. They bring up Tuskegee (clandestine medical experiments on Black males in the 1930s-1940s) and other experimentation of slaves in the past. They have all this historical information, which is factually true. But one thing I try to tell them is that look, this vaccine was developed with Black people in mind.

According to the Centers for Disease Control and Prevention, the coronavirus pandemic was 75 percent responsible for lowering the average life expectancy by about 18 months, the largest annual decline since World War II. In age years, the average dropped from 78.8 to 77.3.

Hispanics experienced the biggest decline at three years; Black folk (remember 70 percent of NFL players are Black) were next at 2.9. These two racial groups have been the most disproportionately affected by the pandemic, especially during the daily, hellish nightmare before the advent of the vaccine last December.

Now, the Biden administration is assiduously driving the train to encourage all Americans to get the arm jab as the coronavirus Delta variant rages.

“The people who aren’t vaccinated probably are consuming much misinformation,” Dr. Sarah Halpern-Meekin, a professor of family studies and human ecology at the University of Wisconsin, told InsideSources. She added that an avalanche of deaths because of the opioid crisis is the chief secondary factor in the life-expectancy decline.

To manage its crisis, the NFL’s strategic master plan is simple: We’re not issuing an official vaccination mandate, but the punishment surely will feel like a mandate. Note that one forfeited loss could cost a team a playoff berth — and cash.

Overall, the best clarion call regarding the Holdout Class came from Kay Ivey, the Republican governor of Alabama, which has the nation’s lowest vaccination rate, per the CDC, at 34 percent. She spoke in frustration on July 22: “Folks (are) supposed to have common sense. But it’s time to start blaming the unvaccinated folks, not the regular folks. It’s the unvaccinated folks that are letting us down.”

Perhaps the rest of the country can take a cue from the NFL, which makes life remarkably uncomfortable for the unvaccinated.

And by using that old sports cliche: No “I” in team.

Said Dr. Rolle, “As football players . . . you have to rely on the other 10 players on the field with you. It is a collective sort of group moving towards one common goal.”

To advance amid these perilous times in society, companies, schools, institutions, governments, businesses, etc., could authorize that those who defy vaccinations must wear masks — indoors and outdoors — and must be tested at least once or twice weekly.

Speaking of ideas and solutions, Academy Award-winning actor Sean Penn has vowed not to return to taping his new Starz series, “Gaslit,” until everyone associated with the show is fully vaccinated. The show, expected to air this fall, is based on the Watergate scandal and, to his credit, Penn is trying to make it easy for the unvaccinated by offering free facilitation toward the vaccination process through his non-profit, help organization CORE (Community Organized Relief Effort).

That’s so pivotal, making it free and easy — on the way to the goal line.