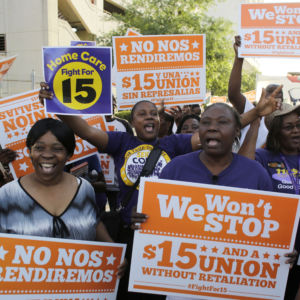 More Than Jobs — the Minimum Wage’s Many Tradeoffs

The House of Representatives will likely vote this week on a plan to raise the federal minimum wage to $15 per hour by 2024. Much of the debate has concerned its employment effect: the Congressional Budget Office estimates the Raise the Wage Act would cost 1.3 million to 3.7 million jobs. But this is only one negative effect. Additional tradeoffs would affect workers who remain employed, and many of these are not in the CBO’s calculations.

Workers are paid more than just wages; they often receive non-wage compensation such as employee discounts, free meals or parking, flexible hours, insurance, tuition assistance and more. One way employers can find a way to afford government-mandated higher wages is to cut this non-wage pay. Some workers might see a higher paycheck, but they wouldn’t necessarily be better paid. They would also have less flexibility in how they are paid.

The tax impact is also important. Wages are taxed, while much non-wage compensation is often not. For example, a restaurant that allows employees to have free or discounted food on the job can easily be giving them the equivalent of several hundred dollars of untaxed income per year. Converting that benefit to wage income instead would subject the employees to the 15.3 percent FICA tax for Social Security and Medicare and likely sales taxes, plus potential state and federal income tax liability.

Adding insult to injury, a recent survey of 574 New York City restaurants found 87 percent of respondents planned to raise menu prices in response to higher minimum wages there. Three-quarters, 75 percent, planned hour cuts, while 47 percent planned staff cuts. Affected employees would potentially lose not only both wage and non-wage pay but would have fewer tip-paying customers due to higher prices.

Those benefit cuts won’t make people happy. Some employees take jobs they don’t necessarily enjoy because of the non-wage compensation, such as helping to pay for skill certifications or tuition assistance that could help down the road. Or maybe a store happens to have an owner who is lenient about employees sometimes showing up late or leaving early — a valuable informal benefit for workers with small children, or who live in areas with unreliable transit. If these benefits are reduced or eliminated, affected workers would not necessarily be made happier by a slightly higher paycheck they could get elsewhere.

We should also be concerned about young workers. Because pay is tied to productivity, younger and part-time workers would be disproportionately harmed. Teenagers who are still in school or fresh out of it haven’t yet had the time to build the skills they need to command a high wage. Making it harder for them to enter the workforce in the first place can hurt their earning power for years to come.

Part-time workers, even if they have experience, have fewer hours in which to develop job-specific skills. They may have higher training costs and make more mistakes as a result. Many part-time workers also have family responsibilities that take priority over work and may have more needs for flexible hours and other non-wage benefits that a full-time worker might not ask for.

Another minimum wage tradeoff, and one that should resonate with progressives, is that a $15 minimum wage would give an unfair advantage to big businesses such as Walmart, Amazon and McDonald’s. They can absorb higher costs and automate some jobs, while a mom-and-pop store or restaurant might not be able to.

Executives from Walmart and Amazon support increased minimum wage laws, despite both companies having starting wages well above what is required. Such bills would affect competitors far more than the companies themselves.

McDonald’s, while not supporting the Raise the Wage Act, is not opposing it either, even as it installs labor-saving kiosks in thousands of locations that smaller restaurants can’t afford.

Every policy has tradeoffs. With minimum wages, those tradeoffs go well beyond a couple million lost jobs. They range from non-wage pay cuts to a tax increase on low-income workers, to fewer opportunities for young and part-time workers, to an artificial competitive advantage for big businesses.

If the goal is to reduce poverty, Congress should instead focus its energy on lifting regulatory burdens that disproportionately affect low-income families to the tune of as much as $3,500 per year.