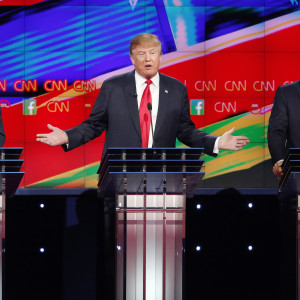 Morning After: Trump Supporters As Stunned As the Candidate

One of the most interesting issues in the run-up to Monday’s Iowa caucuses was the paradox facing Donald Trump: How, exactly, does a candidacy built on repeated assertions of supremacy and unshakable assumptions of victory respond to a loss?

It’s early, but it was clear on a morning-after Tuesday that Team Trump is still nursing an electoral hangover from Monday night’s defeat at the hands of Sen. Ted Cruz.

Trump went silent for 15 hours on Twitter before returning with a subdued message for his nearly 6 million followers that echoed a surprisingly gracious concession speech to the Texas Republican the night before.

My experience in Iowa was a great one. I started out with all of the experts saying I couldn’t do well there and ended up in 2nd place. Nice

A few tweets later, though, and the billionaire developer was firing fastballs again, taking shots at the press.

The media has not covered my long-shot great finish in Iowa fairly. Brought in record voters and got second highest vote total in history! — Donald J. Trump (@realDonaldTrump) February 2, 2016

Some of Trump’s friends and supporters seemed a little shell-shocked. Former Alaska Gov. Sarah Palin was still silent by midday on Twitter and Facebook, as was San Francisco talk show host Michael Savage. Unlike its host’s Twitter feed, the “Savage Nation” account was peppered with updates on the race. But the show’s focus was on allegations of foul play.

Radio talker Alex Jones, who has had Trump as a regular guest on his “InfoWars” program, downplayed Monday night’s results. “It’s what they expected — a narrow loss,” he told the The Daily Beast. “Then he goes on to dominate New Hampshire and other states. He was advised not to campaign there,” Jones said, referring to Iowa. “That’s what’s going on. The evangelicals — some of them just couldn’t vote for Trump.”

On “Morning Joe,” potential Trump running-mate Joe Scarbrough marveled over Cruz’s get-out-the-vote effort. “Ted Cruz was light years ahead of the field in terms of his turnout model,” the former Republican congressman said on the MSNBC program.

One of Trump’s most outspoken supporters, conservative author and commentator Ann Coulter, was an exception, relentlessly needling Trump rivals Cruz and Rubio through Monday night and into Tuesday.