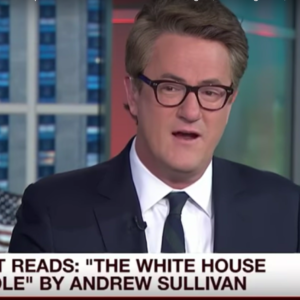 It’s the first day of CPAC and Washington is abuzz. This year, the event has received additional attention because of its controversial speakers. President Donald Trump, who was forced to back out of last year’s conference, will give a speech on Friday morning, and Milo Yiannopoulos was scheduled to address the conference before his invitation was revoked several days ago over comments made about pedophilia. The two men could both be kindly deemed firebrands. The brash style they share is becoming increasingly common in right-wing media. On his show on Thursday, Joe Scarborough argued that liberal colleges create provocative conservatives.

According to Scarborough, increasingly inflammatory right-wing rhetoric was likely a reaction to overwhelming liberal bias in higher education. Scarborough began by defending conservative students who find themselves a minority on campus. Not only are their fellow students generally more liberal, the vast majority of professors are as well.

“It gets to a point where whatever you say in class, if you’re not left of center, you get booed, you get sneered at, and so pretty soon you just go quiet and let them run roughshod. And people who are not conservative will never understand this in a million years,” Scarborough said.

After being shouted down for offering reasoned defenses of conservative positions, conservative students might feel that there was nothing to lose by becoming openly provocative, Scarborough argued.

“If I’m going to Dartmouth and I can’t express what 53 percent of Americans believe….if I can’t even say mainstream conservative thought in my class, I may as well go out on the quad and have an affirmative action bake sale,” said Scarborough.

According to Scarborough many on the right have discovered that they can reach a broader audience by creating a spectacle than by attempting a reasoned debate. In this sense, liberal colleges create provocative conservatives. He called this reality “one of the great failings” of the American education system. It’s an argument made earlier this week by Andrew Sullivan in New York Magazine.

“I feel like I know Stephen Miller….” Sullivan wrote, “because I used to be a little like him.”

“I wanted to annoy and disrupt the smugness around me,” Sullivan continued.

“I am noting merely that right-of-center students are often mocked, isolated, and anathematized on campus, and their response is often, sadly, a doubling down on whatever it is that progressives hate.”

Both Scarborough and Sullivan argue from a psychological perspective. To them, the rush towards the inflammatory is a natural reaction to feeling outcast, excluded, or shut down. More than just that, for some right-wing writers it can be wildly profitable.

Ann Coulter, one of the writers Scarborough mentioned, has written eleven increasingly inflammatory books. Although sales of her last book, Adios, America, were lower than some of her earlier books, it still spent five weeks on the New York Times bestseller list for nonfiction. She has an estimated net worth of $8.5 million.

In interviews, Coulter has admitted that while she believes in conservative principles, she also enjoys stirring up the left. In an interview with the Miami Herald last spring, she joked that sometimes she made outrageous comments to provoke protesters.

“There’ve been a few times that my finger hesitated over the send button,” Coulter said. “But then I usually send it anyway. I get a little belligerent when not enough protesters show up at my appearances. ‘Come on, did you not read last week’s column?’”

While Coulter argues that she is not solely playing for a reaction, it is clearly part of her image. The same can be said of Yiannopoulos, whose “Dangerous Faggot” tour has been met with protests around the country. He wasn’t even able to finish his speech at the University of California Berkeley before rioting protesters forced organizers to cancel the event. The protesters caused $100,000 worth of damage.

Despite his polemics, Yiannopoulos receives speaking invitations from student groups looking to make a splash on campus.

Writers on the right are not the only ones to discover that they can reach a broader audience by creating a spectacle than by attempting a reasoned debate. To some extent this slide from discourse to polemics has been mirrored on the left. Opponents of the Dakota Access Pipeline mostly used protest camps to battle energy development. Although they filed some challenges in court, the bulk of their resistance was through provocative actions documented by Facebook posts, tweets, and Youtube videos. It’s no accident that one of the camp’s best known landmarks was “Facebook hill”

Scarborough’s argument brings the history of the conservative movement full circle. Bill Buckley entered the political stage with the publication of “God and Man at Yale,” which lamented closed-mindedness in American higher education sixty years ago. The problem was still around 25 years ago, when The Closing of the American Mind, was published. However, neither 1951 nor 1987 saw the sort of provocative reactions becoming increasingly common today.