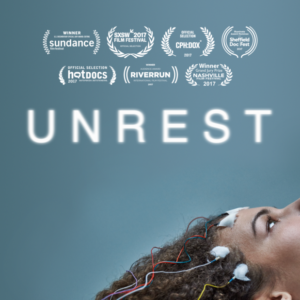 A Movie David Goes Against a Goliath of a Disease

The movie is called “Unrest.” The unrest of the title is one of the many symptoms of Myalgic Encephalomyelitis, also known as Chronic Fatigue Syndrome, often expressed as ME/CFS. It is at one level a touching love story and at another, where its real purpose lies, a cry to be heard.

This mysterious, debilitating disease affects maybe 1 million Americans and has no cure, is hard to diagnose, and there is no therapy other than attempts to alleviate the worst symptoms. It is a disease of the immune system. To get it is to have normal life confiscated and replaced with bare existence, pain, confusion and fatigue, which is not ameliorated by sleep, hence the unrest.

Dr. W. Ian Lipkin, who directs The Center for Infection and Immunity at Columbia University, and who has been described as the nation’s leading virus hunter, says that ME/CFS may be like cancer: one disease in many forms.

“Unrest” is not the first ME/CFS documentary but, to me, it is the most compelling. Actually, it is a compelling movie in its own right and someone with no interest or knowledge of the disease would find it engrossing — and damn good entertainment.

The movie, which has been entered for an Oscar in the documentary category, and premiered at the Sundance Film Festival, is the work of Jennifer Brea and a team of very able professional moviemakers. But Brea is the star, the producer and the director. She also is a severely affected victim of ME/CFS, and the suffering you see on the screen is not a re-enactment.

The key to the movie is home footage shot by Brea and her husband, Omar Wasow, as she fell ill. It opens with Brea in extremis crawling across a floor, flattened and in pain. It has a fine admixture of the horrors of the disease and the joy and love of her restricted life with Omar.

This is major because the disease is not part of normal medical education syllabuses, greatly exacerbating the diagnosis problem. The film makes a strong point about the inclination of medical establishments to treat this very awful physical disease, with its endless suffering, as a psychological one.

One of the most harrowing scenes in “Unrest” concerns the arrest in Denmark of a wrongly diagnosed patient, Karina Hansen, who was forcibly removed by the police and confined in a clinic without recourse for three years. Her parents were denied access for the first year. This is an extreme example of the cruelty when somatic diseases are diagnosed as psychosomatic.

For seven years I have covered ME/CFS and its devastation: the broken marriages, teenagers who cannot go to school, and patients who must lie in dark silent rooms, wondering why they must live. In the course of my reporting, I have received thousands of emails from around the world, describing the loneliness and the daily hell of living with ME/CFS. Most patients I find go through periods of extreme incapacity and then a life where every effort has its price: One woman in New York knows that dinner with friends will bear a price of three or more days of exhaustion and bed confinement.

I have interviewed young women who clearly will never see a wedding day, men who may never know the enchantment of love, and parents who suffer the special agony of having to take care of children who cannot help in any profound sense.
Because of the ignorance of ME/CFS in the medical profession, the minuscule funding for research from the government, through the National Institutes of Health and the big foundations, I salute the arrival of a movie that may shake up a complacent world.

Some years ago I started, along with my friend and ME/CFS suffer, Deborah Waroff, the YouTube channel ME/CFSAlert. Our motto was comfort the patients, educate the doctors and shame the government.

“Unrest” does the job on a grand scale.