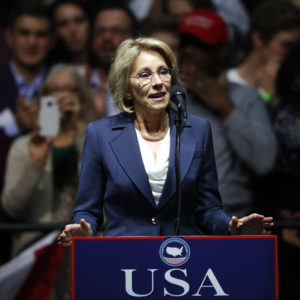 How Much Power Would DeVos Actually Have as Education Secretary?

Sen. Tim Scott, R-S.C., fired back in his comments on Tuesday morning during an executive session of the Health, Education, Labor, and Pensions (HELP) Committee that saw the DeVos nomination referred to the Senate floor on a 12-11 party-line vote.

In his discussions over the DeVos nomination with teachers in his state, Scott said he came to realize that “we were not having the right conversation.” The assertion that DeVos would have the power to fundamentally alter the American public school system is “patently false,” he said.

So the question lingers, should DeVos be the next education secretary, how much power over the nation’s school systems would she actually have? Even if she wanted to, could she “single-handedly decimate” traditional public schooling as Schumer and her other opponents have suggested?

The short answer: “if she wants to have a major impact, she has to have [new] legislation,” said Jack Jennings, who spent 27 years from 1967 to 1994 as a lead staffer and then general counsel for the education branch of the House committee that oversees education and labor.

Without legislation or major increases in appropriations, DeVos would be left with wielding a softer type of power.

“The main influence the secretary has is in setting the agenda,” said Jennings in an interview with InsideSources. Her priorities could end up influencing national, state, and local education policy debates over her entire tenure, he said.

Since leaving his perch on the Hill, Jennings founded the influential and non-partisan Center on Education Policy, and authored a book, Presidents, Congress, and the Public Schools.

While Jennings spent decades working for Democrats on the Hill and has returned to progressive advocacy since leaving the Center on Education Policy in 2012, he is well respected in education policy circles for his lengthy experience at the heart of education policy debates. In an adversarial profile of Jennings, the right-leaning group Education Next referred to him as “a one-time king of Capitol Hill education policy.”

Jennings has been around for long enough to see the “waxing and waning” of the federal government’s role in local education policy. And, under the recently passed Every Student Succeeds Act (ESSA), the powers assigned to the Department of Education (DoED) are at an ebb.

Stalled progress under the ambitious federal interventions of the Bush and Obama administrations led to a backlash and a major devolution of department powers. Sen. Lamar Alexander, the chairman of HELP, has repeatedly vowed to defend these legislative interdictions.

Therefore, for signature No Child Left Behind issues such as testing, accountability, teacher evaluations, and school turnaround, Congress has “closed the barn door” on direct federal mandates, said Jennings.

DeVos and the new administration, however, appears uninterested in re-litigating the fights that precipitated ESSA. DeVos has voiced support for the devolutionary principles behind ESSA.

Instead, the bulk of the new administration’s impact on local schools is likely to depend on whether President Trump is successful in getting congressional support for a proposed $20 billion block grant to promote school choice, including charters and vouchers.

“Reprioritizing” existing federal funds, from the education department’s $70 billion-plus budget, as Trump advocated during the campaign, would be difficult for the administration to accomplish unilaterally. Under ESSA, there are statutory restrictions on how many of the department’s grant programs allocate funding.

The education committees in Congress also have other big-ticket items on their plates, including the reauthorization of legislation that regulates higher education, career and technical training funds, and child nutrition.

There is some support for advancing the choice proposal, however. In a closed panel with the National School Boards Association on Monday, the chairwoman of the House Education and Workforce committee, Virginia Foxx, R-N.C., expressed her commitment to expanding school choice for parents, though its too early to divine what the particulars of such legislation would look like.

If Foxx is successful in getting a bill to the Senate, then the key question would be whether Democrats rally to filibuster or block the legislation.

Traditionally, school choice proposals have made for strange bedfellows. According to Jennings, some Democratic black lawmakers from inner cities have historically reflected their constituents’ support for increasing school choice, while white suburban Republican voters satisfied with their traditional public school offerings have previously bucked their party on choice initiatives.

It remains to be seen, however, how the current climate of stridently partisan national focus on education policy colors legislative efforts moving forward.

Ed Department by the Numbers

In an emailed statement, a spokesperson for the Thomas B. Fordham Institute, a right-leaning education policy think tank run by former DoED employee Michael Petrilli, concurred with Jennings that most of the education secretary’s power comes from agenda setting—most of which would likely revolve around school choice under DeVos.

“But the Department, at the end of the day, is largely responsible for the successful administration of large-scale grant programs,” read the statement. “Much of the actual power—and responsibility, particularly under ESSA—is left up to the states.”

The education secretary oversees a department staff of over 4,000 employees, the fewest of any cabinet level appointee, and tens-of billions in aid and federal grants to support primary, secondary, and post-secondary education systems. The DoED also has a healthy budget for research.

Notably, Head Start, the federal government’s largest pre-K program, is not run by the DoED, but is overseen by Health and Human Services instead.

The biggest K-12 programs include (in 2015 appropriations) over $14 billion in ESEA Title I grants that are targeted to students who come from low-income families. And over $12.5 billion in IDEA grants aimed at supplementing the cost of providing personalized disability services to all students who need them.

For higher education, the department oversees the disbursement of $28 billion in Pell Grants, which serve as the basis of financial aid packages for disadvantaged students pursuing higher education.

The DoED also oversees a massive student-loan program, which has over $1 trillion outstanding on the books. Under Obama administration reforms, the DoED is the lender, rather than any intermediate private bank or financial institution.

Some on the left, including Massachusetts Sen. Elizabeth Warren questioned DeVos’s fitness to run such a large loan program, given her lack of experience in finance. Neither of Obama’s education secretaries had major financial experience prior to assuming their roles either.

From a policy perspective, the education secretary oversees the office for civil rights, which is tasked with forbidding discrimination in institutions that take federal money—in other words, the vast majority of American K-12 and higher education schools.

Deciding how aggressively to protect civil rights protections, therefore, is one area where a Sec. DeVos and the Trump administration would have considerable unilateral influence, if confirmed.

Historically, the nomination and confirmation of an education secretary is typically a low-key and routine affair. Not so under the new Trump administration.

Since the creation of the Department of Education under President Carter, the most closely contested confirmation vote was in 2016 during the elevation of Sec. John King Jr., Obama’s second Education Secretary.

A Republican Senate that was by then openly critical of the outgoing administration, in an election year, smoothly confirmed King by a vote of 49-40.

If confirmed, DeVos’s legacy will be determined in large part by what she accomplishes from a position whose authority has been severely curtailed.

The long and controversial tenure of Sec. Arne Duncan, who served for many years in the Obama administration and oversaw huge amounts of federal stimulus funds, “was the time when the U.S. Secretary of Education had the most power and money” since the department was established, said Jennings.

Duncan eventually “reaped what he sewed,” he said, which included a major grassroots backlash against federal involvement in education.

Unless Trump and his eventual education secretary can pass legislation to alter the status quo, it appears unlikely that systematic educational reform, including a mandate to expand choice for public school parents, will originate directly from Washington.