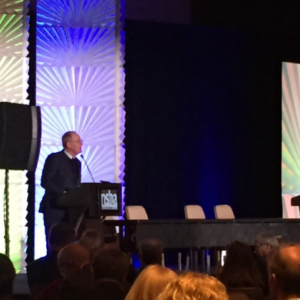 The Chairman of the Senate’s Health, Education, Labor, and Pensions (HELP) committee addressed an assembly of public school board leaders on Monday against the backdrop of a spirited national debate over the Trump administration’s nomination of Betsy DeVos for Secretary of Education.

The National School Boards Association (NSBA), which represents over 90,000 school board members from nearly every public school district in the country, is convening hundreds of members in Washington, D.C. this week to lobby Congress on the group’s signature issues.

The key issue for the school boards association, which holds a yearly advocacy conference, is the promotion of local autonomy over how schools are administered, and how educational budgets are crafted.

Sen. Lamar Alexander, the Tennessee Republican who chairs the committee that oversees education policy in the Senate, mostly avoided mention of the contentious DeVos nomination, and instead focused his remarks on congratulating the association on their “major role” in the recent reform of federal education policy.

More than a year ago, the passage of the Every Student Succeeds Act (ESSA) marked a victory for the NSBA and allied interests on the issue of local autonomy for schools.

While the new law explicitly curtails some of the more heavy-handed federal powers associated with the George W. Bush-era No Child Left Behind policies, there is still much at stake in the battle over how the Department of Education implements the legislation.

Alexander, a former Secretary of Education in the George H.W. Bush administration, drew loud applause for his promise to combat overreach from the education department. “We figure that you know better,” he said to the school board members in attendance.

ESSA, like its predecessor, still requires states and local districts to test their students, evaluate teachers, identify low-performing schools, and gather data across a variety of metrics.

Senator Alexander told the assorted school board members that the key difference under the new law is that now “you decide” on how to act or intervene in a local school system, rather than struggling to manage federal prescriptions.

“It’s hard enough to evaluate teachers without someone in Washington looking over your shoulder,” he said, by way of example.

Another thorny debate in the enforcement of the new law is rule-making on how per-pupil expenditure is calculated in distributing federal dollars aimed at increasing equity.

Education officials under Obama took a strict reading of “supplement not supplant” provisions in the law that would prevent districts and states from replacing local dollars with federal grants, rather than using the funds as an addition to locally raised money.

In a recorded video message that followed Alexander’s remarks, Sen. Patty Murray, D-Wash., the ranking member on the HELP committee, alluded to the controversy over ESSA implementation by saying she would prevent the “rolling back” of protections for schools that service at-risk students.

The NSBA has said that while it shares the federal government’s commitment to equity in education, the rules drawn from expansive readings of the “supplement not supplant” provision are onerous to local districts.

Alexander, who had clashed publicly with former Education Sec. John King Jr. over the Obama administration’s interpretation of supplement not supplant, backed up the NSBA position, and said he would remain active in “making sure that mandates in Washington that were outlawed, stay outlawed.”

A common theme on the sidelines of the NSBA’s advocacy conference was frustration with federal regulations on local education issues that are costly to implement.

“If they are going to tell us what we need to do and how to do it, they need to fund it,” said Teresa Gee Harris on the federal government’s role in her rural southern Georgia district, Grady County Schools.

Harris, a school board member, said she came to Washington to lobby her representatives to encourage more funding for her students.

While urging the government to trust local school boards to run themselves, the NSBA also lobbies Congress to fully fund existing federal educational grant programs—Title I for economically disadvantaged students, IDEA for students with disabilities, and other smaller programs including school lunches and vocational training.

In his speech to the conference, Sen. Jon Tester, D-Mont., spoke to the concerns raised by Harris and others about unfunded, or underfunded, federal mandates.

“Congress needs to live up to its funding promises of IDEA,” he said to loud applause.

The Individuals with Disabilities Education Act, or IDEA, requires school districts to formulate an Individualized Education Program, or IEP, for any student with a learning disability.

Under IDEA protections, parents can sue if they are dissatisfied with the IEP put together for their children, and can sometimes get their child placed in a private school, at the local public school’s expense.

Because school districts and states have to draw money from their general educational budgets to satisfy IDEA requirements, the lack of federal funding “short-changes everybody,” said Senator Tester, who sits on the Senate’s powerful appropriations committee.

Similarly, the NSBA has also voiced concerns in the way the federal government has regulated child nutrition, suggesting that in some cases dollars intended for instruction have had to be used to cover federal mandates.

The closest Alexander came to referencing the heated fight over DeVos’ nomination was a quip: “since the election things have been a little testy.”

As if to illustrate his point, dozens of protestors rallied to picket against Alexander’s support of DeVos outside of the Marriott Marquis in downtown Washington where the NSBA conference was held.

While the NSBA’s leadership has largely stayed out of the confirmation battle, some of DeVos policy preferences, especially her support for “school choice,” are a difficult sell for some public school board members.

Alexander said that voucher policy, like most other education policies, would be left to the states, but Tester delivered an ardent indictment of vouchers.

Tester, who opposes the DeVos nomination, suggested that vouchers can be particularly damaging to rural public schools.

He vowed to suppress vouchers “at every turn,” and called them another “nail in the coffin” for rural communities that are already struggling.

The Senate HELP committee will vote on the DeVos nomination Tuesday morning.

Republicans hold a majority on the committee and are expected to move her nomination forward, but the mainstream interest and raucous tone over the confirmation process is somewhat unusual for a wonky policy area in which Democrats and Republicans have historically been able to find common ground.

Opponents of DeVos’ nomination are targeting GOP Sens. Susan Collins of Maine and Lisa Murkowski of Alaska. Both women are moderates who represent states with large rural areas and are considered to be the most likely to defect from their Republican colleagues on the HELP committee, though this seems unlikely. DeVos has received endorsements from a wide range of Republicans and several Democrats outside Washington supportive of education reform.