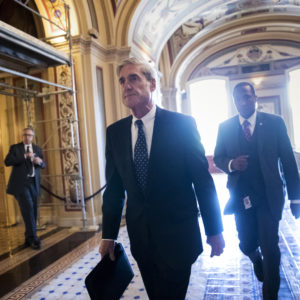 Mueller Can’t Unrig the System, but Movements Can

Once upon a time, the Mueller report was supposed to mark the end of the “Russiagate” mystery.

This yearning now looks naive. Now the report itself is the subject of ongoing battles over redactions and interpretation between Democrats and Trump’s attorney general.

Even more naive, however, was the faith that evidence of foul play with Russia would put things to right in our political system after an aberration in 2016.

It’s not that there was nothing “there.”

Russia and its online troll farms plainly wanted Trump to win. Members of Trump World lied extensively about contacts with Russians, and about projects like the proposed Trump tower in Moscow. Top-level campaign staff, even Trump’s own son, actually met with Russians promising government-sponsored dirt on Hillary Clinton.

More revelations may follow as reporters dig through the redacted Mueller report. Seems likely enough, even if collusion is never definitively proved to a legal standard.

The naive part is the belief that our political system is healthy enough to correct itself, if only the right piece of evidence falls into the hands of an elite prosecutor looking for collusion.

Plainly, it’s not. Because evidence of much more thorough collusion has always been perfectly out in the open — with corporations. While Russigate gobbled up all the cable news hours, this sort of collusion has had a far more catastrophic material impact on real people.

For instance, an authoritative U.N. climate report gave the world just 12 terrifyingly short years to avert the worst impacts of climate change. Since Trump was elected hurricanes have put Houston, America’s fourth-largest city, underwater, and killed as many Americans in Puerto Rico as died on 9/11. California, our most populous state, seems like it’s always on fire.

How has Trump responded? He pulled the U.S. out of the Paris climate agreement, put first an oil-backed politician and then a coal lobbyist in charge of the EPA, and handed the Departments of State and Interior over to oil men.

What about health care? We spend more on it than any developed country. It’s our leading cause of bankruptcy, yet we live shorter lives than people in our peer countries.

Still, Trump openly partnered with health care profiteers in a bid to throw up to 30 million Americans off even the modest coverage offered by the Affordable Care Act. His administration is trying to kill the law to this day.

On taxes, Trump and his party rammed through an enormous, $2 trillion tax cut for the rich and corporations — and immediately proposed cutting Social Security and Medicare to cover the damage.

This is much deadlier “collusion” than anything Trump could’ve arranged with the Russians, and Robert Mueller can’t do a thing about it.

You know who can? Activists like the Sunrise Movement pushing for a Green New Deal. The democratic socialists who made Medicare for All a litmus test in the Democratic primary. And the majority of Americans who want the Trump tax cuts overturned.

Support for all these ideas is growing in Congress, thanks to cheerleading by progressive members like Reps. Alexandria Ocasio-Cortez of New York and Pramila Jayapal of Washington. Yet by and large they’ve enjoyed nothing like the protection offered to narrower undertakings like the Mueller investigation.

To the contrary, leading Democrats have at times scoffed at them. Nancy Pelosi dismissed the Green New Deal — the most comprehensive progressive vision that actually saves the planet yet devised — as a “green dream or whatever.” And a top Pelosi aide privately comforted pharmaceutical executives that the Democratic leadership wasn’t serious about Medicare for All.

Rather than confront these interests, they treated Russia as Trump’s most egregious crime. Even worse, a few even sprinkled in neo-Cold War calls to confront Russia geopolitically, raising the stakes dramatically.

It’s not that Trump’s possible collusion or obstruction don’t deserve scrutiny. But the other Republicans who collude openly with these industries plainly have no intention of holding Trump accountable for Russia or anything else. Leading Democrats, too, are constrained by their accommodations with big money.

This arrangement, in short, isn’t going to correct itself. But real-life movements, organized around real-life issues like health care and the planet, really could.

Maybe they are already.