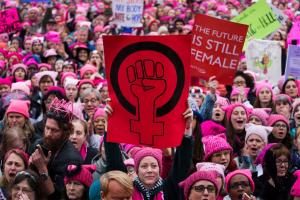 My Message to the Group-Think Feminists: “Bring it On”

Today’s Democrats and their left wing base refuse to accept that women across the country hold a variety of opinions about, well, everything. Progressives want to believe that all women walk in lockstep together, like some creepy, Stepford Wife army. Conservative women are not considered “real women” because we don’t toe the leftist line. Ironically, these same progressives who exclude conservative women from their cool-kid Real Woman Club include women who have penises, or – as the rest of the world like to call them – men.

The fevered and frenzied attempt to personally and professionally destroy Brett Kavanaugh, President Trump’s second Supreme Court nominee,  brought with it a renewed surge of articles and statements about “women” as a monolithic group. We saw headline after headline, and breathless reporting from left wing activists posing as journalists, about how “women” believed Christine Blasey Ford. We were told that the Republicans just lost “women” for good, and that “women” are disgusted by President Trump.

One would think the political party that worships at the altar of diversity would embrace the various viewpoints that women possess, but that isn’t the case. Senate Democrats and their radical feminist base keep screaming about how “women” stand by Dr. Ford, and how “women” didn’t want Judge Kavanaugh on the Supreme Court.

Similarly, “survivor” is used as a blanket term. “Survivors of sexual assault” were all opposed to Brett Kavanaugh serving on the Supreme Court. Not just some survivors, but all of them. One hundred percent of them.

Except these claims of “all” aren’t even close to being true. At Tea Party Patriots Citizens Fund, we collected letters from women who enthusiastically supported Brett Kavanaugh and wanted to see him confirmed to the Supreme Court. Some of these women are survivors of sexual abuse and rape, and yet, contrary to the media/leftist narrative, they wrote letters in support of Brett Kavanaugh because they were so incensed watching the Democrats trample on the concepts of due process and presumption of innocence in their quest to gain power.

Independent-thinking women are sick and tired of being lumped in with the women who trap elected officials in elevators and scream at them, or who want to throw away the constitutional rights of men in this country. We refuse to be tied to women who wear pink kitty hats or pop their heads through homemade vaginas made of felt and satin and wander around with fists raised in the air, screaming obscenities. We are officially breaking rank from the screeching, Marxist feminists who purport to represent all women and who try to speak for the rest of us when they smear an innocent man as a serial, violent gang rapist.

We reject your absurd slogans like, “The Future is Female,” because that one literally makes no sense, at all, and we reject your dangerous slogans like, “Believe All Women,” because women are not immune from corruption, malice, and dishonesty. To suggest otherwise, frankly, demonstrates a worldview that is untethered to reality; a bigoted position that deserves to be stamped out and discarded.

So, women of the left, the rest of us are putting you on notice: your time in the driver’s seat is over. Your radical, anti-man revenge fantasies have done enough damage – and not just to men, but also to the relationships between men and women, to families, and to women themselves.

You can occupy Senate buildings and scream at people, but while you have a temper tantrum, our women are spending time getting out the vote. That red wave is going to feel awfully good, especially coming, as it will, so soon after Brett Kavanaugh was sworn in as America’s newest Supreme Court Justice.