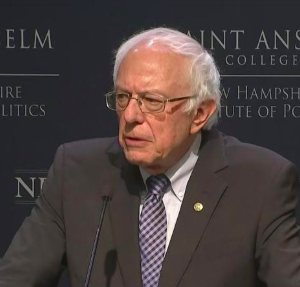 Sen. Bernie Sanders speaks at a Politics and Eggs breakfast on the campus of St. Anselm College, February 7, 2020.
News

N.H. Voters Oppose Medicare For All by 2-to-1 Margin

As Bernie Sanders campaigns across New Hampshire on behalf of his single-payer healthcare plan, a new poll finds the state’s voters overwhelmingly reject Medicare For All.

New Hampshire voters oppose Medicare For All by a two-to-one margin, and more than half “strongly” oppose it, according to a new poll released by the Coalition Against Socialized Medicine (CASM), a project of the American Conservative Union.

The survey finds likely Granite State voters oppose the signature healthcare measure of Sens. Bernie Sanders and Elizabeth Warren 65 to 31 percent, and 54 percent say they strongly oppose it. While a slight majority of Democrats (53 percent) support Medicare For All, 85 percent of Republicans oppose it.

Perhaps most significantly for the November election, independent voters overwhelmingly oppose it 66 to 30 percent.”New Hampshire voters are some of the best-educated, politically-astute voters in the country, and they overwhelmingly oppose price controls on prescription drugs and Medicare For All,” said CASM Executive Director Marc Palazzo. “Americans reject socialism and New Hampshire is no different. They’re saying ‘no’ to a radical proposal that puts the quality of their own care at risk.”

The poll of 400 likely general election voters was conducted by McLaughlin and Associates on February 4-5 and has a margin of error of  +/- 4.9 percent.

New Hampshire voters rank healthcare as their top issue in the upcoming election — narrowly edging out jobs and the economy — and they are concerned about the potential impact of single-payer healthcare and government regulation on the quality of their care.

Four in five (83 percent) of New Hampshire voters oppose price-control policies if they would lead to the federal government denying access to effective medicines or treatments, also known as “rationing.” The opposition is intense: 70 percent “strongly” oppose it, and the opposition cuts across all demographic groups.

And nearly two-thirds of New Hampshire voters (64 percent) oppose price controls on prescription drugs if they lead to fewer medical breakthroughs and cures, fewer investments and research-based jobs in the United States, and countries like China overtaking the United States as the world leader in biomedical innovation and manufacturing.

“The more voters learn about these policies, the less they support them. New Hampshire has always served as a good litmus test for national politics, said Jim McLaughlin, president and partner of McLaughlin & Associates. “These results show any candidate running on a platform that includes price controls or Medicare for All will have a hard time winning critical swing states necessary to take the Presidency.”

The Coalition Against Socialized Medicine is a broad coalition of leading conservative and free-market groups such as the American Conservative Union, Heritage Action, FreedomWorks, the National Taxpayers Union, Club for Growth, Citizens Against Government Waste, American Commitment, and the Committee to Unleash Prosperity.