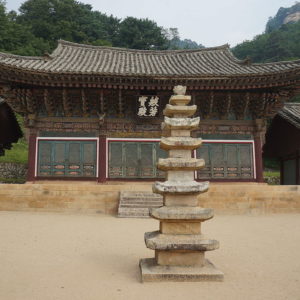 Mount Kumgang, that cluster of thousands of granitic peaks and pinnacles in North Korea just above the line with South Korea, evokes so many memories. The first time I went there, in April 1995, was with a group of Korean-Canadians who had gone to North Korea ostensibly to attend the Pyongyang International Sports and Culture Festival, featuring the Japanese wrestler Antonio Inoki and the American Ric Flair, two of the greatest of all-time. This group, which I had joined at the suggestion of a diplomat in North Korea’s U.N. mission, had not gone there to watch the wrestling.

The show in Pyongyang, staged in May Day stadium before a record crowd of nearly 200,000, the largest ever for professional wrestling, scandalized most of those in our group. Standing on the grass in the middle of the stadium, almost at ringside, we could not believe the North was staging such an event. The elderly women in the group practically fainted as they watched the wrestlers slamming, butting and throwing their opponents around. They gasped even more when they saw matches between female wrestlers in brief attire attacking each other with the same ferocity as the men.

North Korea had opened up for the event, and these people were there in search of the chance to meet long-lost relatives with whom our guides, after much coaxing, arranged brief visits. Over 12 days in the North, considerably longer than the average tourist visit, we also were treated to the basic sights, the usual monuments and statues, Kim Il-sung’s childhood home and, yes, a ride in a van south to Kumgang.

For me, the Kumgang visit was the highlight of the trip — that is, not counting the bizarre experience of watching professional wrestling in May Day stadium with the boxing heavyweight Mohammed Ali, a friend of Inoki’s, visible in the stands.

Kumgang had not yet opened to South Korean tourism and Hyundai had yet to build the huge resort area that Kim Jong-un wants to demolish. We did, however, witness a fantastic circus featuring a dancing bear and high-wire trapeze acts at a theater in the middle of the tourist zone, and we plunged into a hot spring spa in the same hotel where we spent one night. Oh, and of course we hiked to Kuryong waterfall, 4 kilometers up a rather steep trail, a must-see for visitors to Kumgang.

By the time I visited Kumgang for a second time, South and North Korea had agreed on a deal for boats to carry tourists from the South Korean east coast port of Donghae to a small port facility built by Hyundai near the resort area. The boat was our hotel. We saw the same sights that I had seen during my first visit. The difference was it was midwinter, and we had to wear crampons on our walking shoes to scramble up the icy trail to Kuryong  Falls, which had frozen into a tower of ice. The circus still featured those great high-wire artists, but I think the bear had been retired.

A few years later, I can’t quite remember when, North-South relations had improved enough for the North to approve travel across the North-South line by road. North Korean immigration officials made sure our names were on their list and let us through to board a bus to Kumgang. This time we stayed in a hotel, one of the structures that Kim Jong-un wants to tear down. Again, the hike to Kuryong Falls was on the itinerary.

When I visited Kumgang for the fourth and final time in 2012, times had changed. South Korean tourism ended with the killing of a South Korean woman by a North Korean soldier who shot her dead after she ignored his warnings not to wander outside the tourist zone. I got to go there with a small group of scholars and educators, mostly from the United States and Canada.

The sights were the same, but the visit was revealing. It was startling to see the tourist zone completely deserted. The Hong Kong team running the duty-free shop told me they had almost no customers. Of course, the high-wire act had gone. Our hotel was empty except for us. Nobody else was on the trail to the falls other than maybe one or two Chinese tourists.

Now Kim Jong-un talks about replacing all the Hyundai-built hotels, shops and smaller houses with what he believes will be the far better creations of his own architects. No doubt South Korea and Hyundai, which built most of the zone and was responsible for its upkeep, will get totally ripped off, as happens in most deals with the North Koreans.