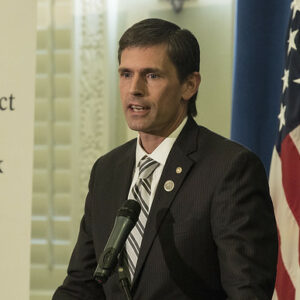 The Land of Enchantment has grown increasingly reliant on the oil and gas industries, which provides 33.5 percent of the state’s Fiscal Year 2020 revenue, according to an analysis from the New Mexico Tax Research Institute. Disruptions to the industry could have a cascading effect, industry officials warn.

“These are real dollars and cents,” said Robert McEntyre, a spokesman for the New Mexico Oil & Gas Association. “When things aren’t going well, we have to find areas to cut back. Oil and natural gas is the name of the game for the New Mexico state budget.”

Of the $2.8 billion the oil and natural gas industry sent to New Mexico’s state coffers last year, about $2.3 billion went to recurring spending, $192 million for non-recurring spending, and $232 million for reserves. Overall, the industry contributed $4.7 billion to the state and local governments. That’s actually down $444 million from the previous year due to the impact of COVID-19 lockdowns.

The state’s public schools have long been the biggest recipient of industry money – $1.1 billion – while health and human services agencies will get more than $640 million. Higher education gets a $300 million cut as well.

That is why the threat to New Mexico’s energy sector from provisions in the federal $3.5 trillion budget reconciliation bill creates a dilemma for the state’s senators, both of whom have been vocal supporters of the state’s energy sector and the jobs it creates.

Sens. Martin Heinrich and Ben Ray Lujan, both Democrats, supported an amendment to prevent the U.S. Environmental Protection Agency from moving ahead with regulations that would ban fracking. They were joined by fellow energy-state Democrats  Sens. Joe Manchin of West Virginia and Jon Tester of Montana.

Manchin has signaled his opposition to the multi-trillion spending in the bill. “(Senate Majority Leader Chuck Schumer) will not have my vote on $3.5 trillion, and Chuck knows that,” Manchin told CNN on Sunday. His stance could provide cover for Democrats like Heinrich and Lujan hoping to dodge a vote that will either anger Washington, D.C. progressives or put local jobs at risk.

In February, Reuters reported Heinrich and Lujan asked White House National Climate Advisor Gina McCarthy to work with them on compensating their state for losses under the pause on federal oil and gas leasing instituted in January. The state is “by far the biggest beneficiary of the federal drilling program because it hosts vast federal acreage overlying a share of the Permian Basin, the world’s most productive oil field” Reuters reports.

Lujan has frequently touted his Revive Economic Growth and Reclaim Orphaned Wells (REGROW) Act intended to clean up abandoned oil and gas wells. It was included in the Senate’s bipartisan infrastructure bill. The legislation sets aside about $4.3 billion in federal funds to clean up orphaned wells on state and private lands, along with $400 million for clean up on public and Tribal lands. It was supported by the New Mexico Oil and Gas Association.

But such support for the industry is competing against progressive causes that both senators support.

In July, Lujan was part of a press conference put together by the League of Conservation Voters pushing for energy policies designed to lower emissions that would also end some energy sector jobs.

“We all understand what’s happening across the country, and if you need to get a better look, if you’re not yet convinced, look out west. We’re seeing reservoirs that have record lows when it comes to water availability,” Lujan said. “This is devastating. It’s hurting farmers, it’s hurting food production. It’s bringing more famine around the world. It’s a national security issue.”

In 2019, Heinrich issued a press release announcing his support for the Green New Deal.

“I stand in solidarity with the students and activists around the world today who are demanding action on climate change, because you are the most powerful tool that we have to make this right,” he said.

Analysis from the Competitive Enterprise Institute found the Green New Deal would cost New Mexico households about $70,000 in its first year. The state would also have to retrofit about 1.8 trillion square feet of residential structures at a cost of $352.7 billion.

House committees have been quietly passing parts of the progressives’ environmental agenda, often with little input from rank-and-file members. Some House Democrats have complained about the bill being crafted by party leadership and the White House, leaving many moderates on the sidelines.

House Republicans, too, are raising concerns with the drafting process.

“I and my colleagues have been deeply concerned about this legislation from the outset, which is why we’ve wanted to have a robust debate on it,” said Rep. Bruce Westerman (R-Ark.), the top Republican on the House Natural Resources Committee during their markup of the bill last week.

Two of those amendments may have been attractive to lawmakers from states like New Mexico. Rep. Garett Graves (R-La.) proposed suspending oil and gas royalty increases until federal officials determine they will not result in a loss of American jobs while Westerman sought to redirect $1 billion in funding to the Bureau of Indian Affairs public safety and justice programs, including funding for tribal police forces.

“It’s been nothing but whiplash from the start,” Westerman said. “First, we were told we absolutely had to debate this package now, despite numerous ongoing crises facing our nation. But then when we actually proposed some critical amendments and attempted to make the legislation at least somewhat bipartisan, committee Democrats suddenly decided they had more important things to do.”