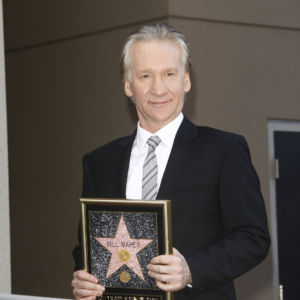 Bill Maher at the Walk of Fame ceremony in Los Angeles, California on September 14, 2010.
[IS] Opinions

First of all, let’s get one thing straight. Many black folk aren’t as upset about people — black or white — using the N-word as the general public is led to believe.

So, when Bill Maher recently mouthed the “offending” phrase “house nigger” on his “Real Time” show on HBO, he was met with much fake outrage from many in the black community. Social media was abuzz. How dare you, Bill Maher, many exclaimed. Maher, the white ultra-liberal comedian-talk show host, crossed a line, many vehemently declared.

Did Maher really cross a line or did many black folk just want to seize the moment. And simply wanted instead to call out another white person. Plus, it’s often super-sexy to many black folk to discuss race openly before a national audience. Just itching to do so. Like a cottage industry. Make a federal case, as the saying goes. And yell and scream. And jump up and down.

This occasional back-and-forth banter about the N-word is about control. And that banter flares up like brush fires in California. It’s akin to a children’s game. Many black folk want to hold white folk hostage over the word, essentially saying, “Look, we get to make the rules about this one.”

As in, hey, we can use that word, but you can’t. We can do something that you cannot. Then chant: Na-na-na-na-na. Remember that childhood taunt on the playground.

What’s really astonishing is listening to so-called black sociological/cultural experts (which is really a euphemism for excuse makers) twist themselves like a pretzel to explain why the N-word double-standard exists.

This question invariably pops up anytime we have that N-word brush fire: Why are black folk, especially black gangsta rappers and hip-hop clowns, allowed to use the word with impunity and white folk can’t even think about uttering the phrase.

One can walk down any sidewalk or drive any four-lane street in any major city in the United States and hear the N-word blaring from a nearby car radio/sound system. Hear black artists gratuitously wailing away using the N-word. Usually, one hears it from cars driven by young, black males.

So, with that, are black folk really, really that upset about the word. Why doesn’t anyone, save for the late C. Delores Tucker, rail against this outward behavior?

Again, perhaps, it isn’t as big a deal to as many black folk as the general public is asked to believe.

Remember Tucker, the activist who labeled gangsta rap lyrics as “pornographic filth,” while the rappers called her every lewd and lascivious name in the book that’s reserved for women.

It’s interesting that the naysayers called for the suspension or worse, the firing, of Maher while giving a pass to black entertainers, who also cross that line.

There’s that question again: How do you explain the double-standard that favors
black folk?

And we heard multiple black thinkers of public note recently spout some gobbledygook on national television that because the N-word has an “unsettled,” “unsettling” and “complicated” history in the black community, that’s an excuse to use it. What the hell does that mean?

You hear the excuse about black folk using the N-word in private conversations, among their circle of friends, just as a Jewish person or an Italian person may use pejorative, ethnic epithets among themselves.

Except for this: The black entertainment industry espouses the N-word out on Front Street for everyone to hear. Unabashedly. Unapologetically. So, if you want to discuss name-calling, Bill Maher ain’t the only dude spreading the N-word on a public platform.

What other racial group or ethnic demographic engages in such silliness?

Speaking of such silliness, what about black folk who speak against the so-called black narrative — the black liberal agenda, the ones who defy the Negro Thought Police and subsequently are labeled “coons” or “house niggers” or “Uncle Toms.” These are black folk who speak publicly without deference to anyone; they express themselves with individual thought and not group-think. They speak under the specter of having their black-race card revoked if they venture off the reservation, where the rules are set on the black code of thinking.

Take note: Acclaimed Harvard educator Dr. Henry Louis Gates told us during a speech at the National Press Club in Washington on March 14, 2016, “There are 42 million African-Americans in this country, which means there are 42 million ways to be black.”

Well said by the good professor.

Just as many black folk refuse to discuss openly the epidemic of black-on-black shootings in Chicago for fear of de-emphasizing the national discussion on deadly police confrontations with young black males, the N-word debate is another classic double-standard of hypocrisy among many in the black community.