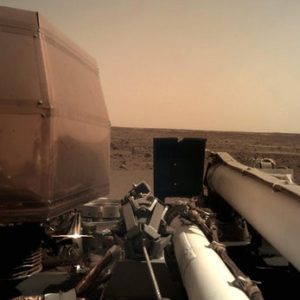 Exploration, or Oppression? NASA’s Mars Mission Problematic for Some Progressives

To most Americans, it’s a successful space mission. But to some academics, the newest Mars probe is politically problematic, a possible step on the path to interplanetary oppression.

On Monday, NASA successfully landed another robot, named InSight, on Mars. It’s an important step towards a better understanding of the red planet and perhaps to the first manned Mars colony. Not all of NASA is  certain the agency should be trying to reach Mars in the first place. For them, the problem isn’t the daunting technological hurdles still to overcome. Instead, the issue is the colonization itself, which brings to mind–at least for some–the sufferings of indigenous peoples, race-based slavery, and continued (earthly) injustices.

“I’m disturbed by the way people talk about going to Mars as if the planet is ours… When we talk about terraforming, that’s a planetary-scale strip mining operation,” said Lucianne Walkowicz, who holds a joint NASA/Library of Congress chair in astrobiology, at a conference earlier this fall.

“It’s been troubling to me to hear people erasing what’s going on here on our own planet both from an environmental standpoint and an indigenous rights standpoint when they talk about going to other planets,” she continued.

So far, there is no evidence of life on Mars, let alone sentient beings or indigenous cultures. That fact, however, is not enough to prevent Walowicz and others from worrying about the ethical implications of space colonization–and even the terms that should be used to discuss it.

“I want us to move away from the idea of ‘exploration’ and ‘discovery’ and toward understanding environments as ‘new to us,'” says Chanda Prescod-Weinstein, an assistant professor of physics at the University of New Hampshire, and another participant in the conference. In her view, Columbus wasn’t the first to “discover” or “explore” the Americas, but rather “just a European who didn’t understand a place that was new to him.”

She says that we need to think carefully about how to “avoid reproducing deeply entrenched colonial behaviors as we seek to better understand our Solar System.” For Prescod-Weinstein, this includes considering the language that we still apply to space voyages.

“[O]ur language for developing understandings of environments that are new to us tends to still be colonial: “colonizing Mars” and “exploring” and “developing,” for example,” she told Gizmodo. “These are deeply fraught terms that have traditionally referred to problematic behaviors by imperialists with those that we would call ‘indigenous’ and ‘people of color” often on the receiving end of violent activities.”

The language worries go two ways. Some scholars fear that space colonization would irrevocably harm the martian ecosystem. Others fret that using colonial language to settle a planet without an indigenous population will cause those terms to be disassociated from the injustices experienced by racial minorities.

With the prospect of manned space flight to Mars still decades in the future, worries about terminology may seem esoteric. Amazingly, it is a growing concern for a peculiar group of left-leaning academics. Some fear that a Martian colony would lead to the environmental desecration of another planet. Others discuss if space colonies will only exacerbate issues like pollution and income inequality.

“You could argue that the effort to colonize space is likely to involve new forms of inequality: shifts in tax revenues and administrative priorities devoted to that,” says Michael Ralph, a professor of anthropology at NYU. Ralph contrasts this with a government that is more focused on solving earthly problems like healthcare.

These sorts of questions, which belong more to the realm of ethics than science, are the product of a space agency that has seen its raison d’etre shift in recent years. Since the end of the space race, NASA has been encouraged to not only explore space, but also to make science more welcoming to various groups. For instance, during the Obama administration, President Obama told NASA administrator Charles Bolden that his highest priority should be “to find a way to reach out to the Muslim world.”

The Trump administration only threw fuel on these fires when it announced the creation of a new “Space Force” to be a “separate but equal” branch of the military. Observers quickly noted the echoes of Plessey v. Ferguson–though they admit it is hard to draw a racial reading from how the phrase was used in his remarks.

Today, there are no humans on Mars, just a handful of robots like InSight exploring and performing experiments. Perhaps by the time they are replaced by people, NASA will have worked out what to call these brave scientists.