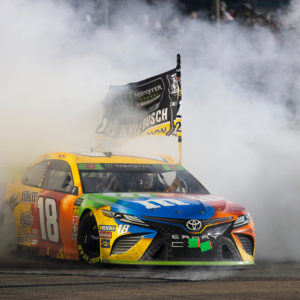 Can you imagine coming home from church on Sunday, February 16, 2020, and not having access to watch the Daytona 500? Unfortunately, this may become the reality for NASCAR fans and rural Americans across the country if Congress doesn’t act to protect satellite TV subscribers by renewing the Satellite Television Extension and Localism Act Reauthorization, or STELAR by the end of this year.

This rule is so important that when Congress last extended it in 2014, the vote was unanimous. Conservative Republicans and liberal Democrats came together to pass this set of rules because they recognized these consumers – many of whom live in small towns and rural communities – shouldn’t be left without access to network TV programming. What’s more, STELAR contains an important provision called the distant signal license which gives customers access to the major four broadcast channels in areas where they otherwise couldn’t get coverage. Hundreds of thousands of mostly rural Americans will be impacted by Congress’ failure to reauthorize STELAR since the legislation is the only thing protecting their access to TV.

For my family, and my motorsports family throughout Virginia, tuning in to watch the three top tier NASCAR races is a part of our lives, as we support many of the competitors and friends we grew up racing against at the grassroots level throughout the Southeast. While NASCAR may be struggling to maintain viewers, it’s an important American pastime to millions of Americans – and it’s worth protecting. Being able to watch stock car racing’s top tier series’ is helping to keep grassroots racing alive. For tailgaters at the track, and for the fans watching at home, STELAR and more specifically the distant signal license is helping to keep this sport alive in America’s most rural communities – where it was born.

Unfortunately, time is running out for Congress to act – STELAR expires on December 31 of this year and there’s only one genuine proposal in the Congress that offers the complete package – Mississippi Senator Roger Wicker’s STELAR reauthorization. Senator Wicker’s approach maintains the status quo that hundreds of thousands of Americans deserve – the chance to wake up on January 1 with access to the TV programming they’ve always enjoyed. Unfortunately, some Republicans in Congress are supporting Democrat-led initiatives that would weaken STELAR, like Chairman Jerry Nadler’s proposal – meanwhile, Nadler is spending his time trying to impeach President Trump!

A failure to reauthorize STELAR will deal a big blow to an American pastime like NASCAR. However, losing the protections of STELAR and the distant signal license extends well beyond aired NASCAR races, effecting Americans enjoying the open road or camping with their RVs, and those who live within America’s most rural communities, like central Appalachia. I believe I speak for the hard-working folks throughout Southwest Virginia and the rest of the U.S. when I say that we love our Sunday afternoons gathered together enjoying our NASCAR races.

Consumers deserve to fully experience and benefit from the services that they pay for, and for these reasons Congress must pass a full STELAR reauthorization by the end of this year!

Lindsey Holman is a former second-generation racer from Abingdon, Virginia. She grew up at tracks across the Southeast going to her father and brother’s races. With over 10 years of racing experience, she retired from racing limited late models in 2011. She wrote this for InsideSources.