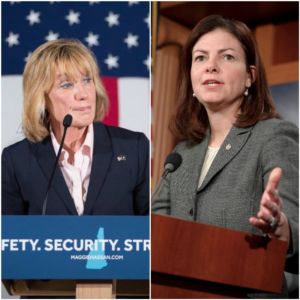 In a campaign fundraising email blasted out to constituents last night, New Hampshire Democratic Gov. Maggie Hassan, now running for U.S. Senate, focused on the U.S. Supreme Court and how important the New Hampshire Senate race is in deciding who will sit on the bench.

But her campaign also throws in this fun fact at the end of the email:

“Winning here in New Hampshire is make-or-break for Senate control — and for the future of the Supreme Court. Nate Silver says that Granite Staters ‘have the most influential votes in the country in… the contest for control of the U.S. Senate.’ This means that we HAVE to prioritize electing Maggie.” 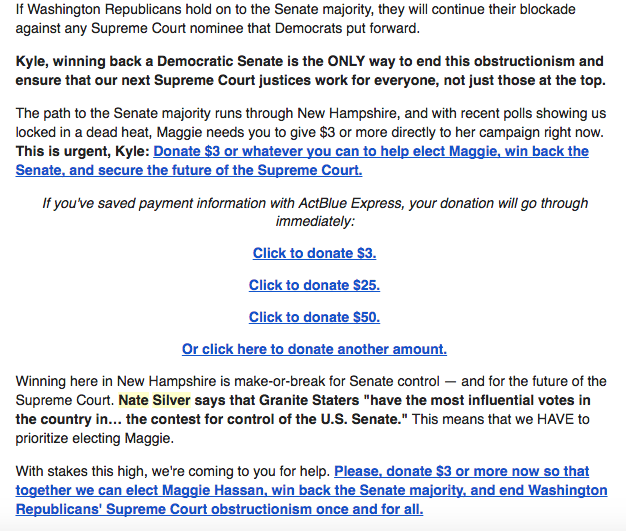 Who is Nate Silver? That’s a good question.

Silver is the founder and editor in chief of the political analytics blog FiveThirtyEight in Washington D.C., taking its name from the total number of electors in the Electoral College. He is a whiz when it comes to poll numbers, analyzing them and predicting outcomes of elections.

Silver is a person everyone inside the Beltway knows and reads on a regular basis.

Since August, Hassan’s campaign has sent out more than 40 emails mentioning Silver and his site’s data. He takes a look at polls released in all 50 states, especially in swing states like New Hampshire, and tries to make sense of it all.

Hassan has also been using one of his tweets as a way to encourage voters to donate to her campaign.

On September 20, Silver tweeted that a voter in the Granite State has 16 times more power to determine who controls the Senate than someone in another state.

A voter in New Hampshire has 16x more power to determine who controls the Senate than an average American voter. https://t.co/FWYcb3CFRK pic.twitter.com/xTPoe8lCjN

Since that day, Hassan has used that statistic to show how important it is for people to vote for her in November.

Kelly Ayotte, the incumbent Republican senator, has only sent a fundraising email mentioning Silver to voters one time — and that was last week to blast Hassan’s campaign for using someone New Hampshire voters don’t know.

“Have you heard of Nate Silver? I hadn’t. I had to ask,” the email starts. “Turns out he’s a national political analyst who Maggie Hassan name-checks in her fundraising emails—A LOT!”

The email continues saying how Hassan is raising money nationwide from liberal activists and how Ayotte is only focused on the people of New Hampshire. 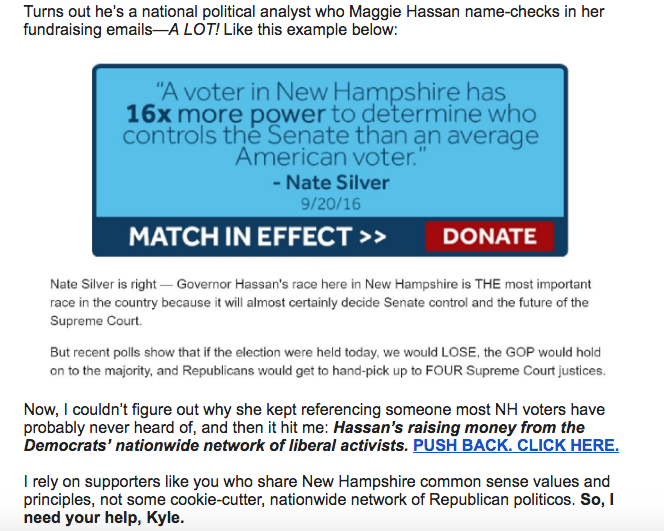 Ayotte brings up a good point. Why is Hassan using a name like Nate Silver’s in her campaign fundraising emails to New Hampshire voters?

Silver could be called a political pundit or a Washington insider and not many Granite Staters would know who he is unless they are very active in reading DC political news.

In a Friday debate between Ayotte and Hassan, this rhetoric was very apparent.

Ayotte recently withdrew support for Republican presidential nominee Donald Trump after a video was released showing him making lewd comments about women. In the debate, Ayotte said she has been willing to stand up to her party’s leadership, unlike Hassan.

Hassan accused her of using “Washington double-speak” to explain her position on Medicare. Ayotte said Hassan was acting like a Beltway insider when it came to the state budget.

“You want to talk about acting like Washington did? She vetoed a budget, and delayed money to address the heroin epidemic, to address mental health beds that we need,” she said. “Now she takes credit for it.”

Ayotte has also sent fundraising emails saying Hassan would be a “rubber stamp” to a Hillary Clinton administration and would do anything her party leadership says.