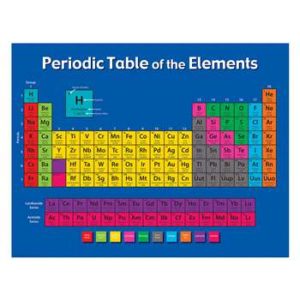 National Periodic Table Day — Why Should We Care?

On Friday (February 7) we have the opportunity to toast the periodic table, but we actually have two other competing national day choices if the periodic table isn’t feeling inspiring. We could raise our glass to National Fettuccine Alfredo Day or alternatively to National Send-a-Card to a Friend Day.

I love fettuccine alfredo as much as and probably more than the next guy, but I can’t relegate Periodic Table Day to second place behind creamy pasta. Yes the pasta provides pleasure, but its longer-term impact is mostly felt around the waist.

National Send-a-Card to a Friend Day falls short for multiple reasons. Between social media, emailing and texting, only Luddites mail physical cards. Also once our gratitude goes beyond acknowledging mom and dad with a designated day, there is no limit to the places we can go — pets, spiritual leaders, artists, bosses, neighbors, maybe even kooky relatives. This holiday sets a precedent that is both fatiguing and destructive to our productivity.

On the other hand, there are bona fide reasons to celebrate Periodic Table Day and not just because the competition is weak. An explanation of the periodic table is needed before one can appreciate what the table has given to our world.

The periodic table is a matrix comprising seven rows (“periods”) and 18 columns (“groups”). It organizes chemical elements by atomic number horizontally and electron configuration vertically. In so doing we are able to assign like properties to groups, which then helps chemists in predicting certain behaviors.

Back in 1869 when the periodic table was created, its inventor, Dmitri Mendeleev, was able to identify gaps that led him to predict 10 elements that hadn’t yet been discovered. He was right about eight of them.

Today, the periodic table hangs in science classrooms worldwide and is used as an easy reference. A quick glance helps users in all sorts of ways — from understanding an element’s properties to anticipating certain reactions and identifying new possible elements.

Visually, a viewer will notice 94 natural elements making up the core of the table. Two detached rows were added on the bottom for synthesized elements made in laboratories or nuclear reactors. The core table features a column on the left of highly reactive alkali metals, like sodium. On the far right sits a column of noble gases, like helium. In between these columns are transition elements, which includes metals and halogens. The table’s organization is simple, elegant and informative.

For the last 150 years, the periodic table has become a Rosetta Stone of sorts, crossing geographies and languages. It significantly contributed to instituting a rational framework and has been dubbed “Chemistry’s Most Important Breakthrough” (New Scientist magazine). Beyond counting protons and electrons, the table has become a critical building block for continuing discoveries.

Consider just a few of the breakthroughs this table has enabled by allowing us to advance the field of chemistry.

— Chemical synthesis of Taxol to treat cancer: Taxol is a chemical compound found in Pacific Yew trees, which have been overharvested and are in rare supply.  Because of Taxol’s therapeutic impact in treating cancer, chemists have engineered a semi-synthetic version, which is widely used today, earning Taxol “blockbuster” status.

— Unraveling the details of surface chemistry: Through a molecular understanding of chemical reactions, we can answer simple questions like, “What causes iron to rust?” There are of course more complex applications: catalytic converters used to clean polluted air, anti-corrosion technology to protect surfaces, and engineered biomaterials for medical purposes. All are enabled by surface chemistry and our ability to decipher chemical reactions.

— Flat screen displays: By moving from cathode ray tubes to liquid crystal displays, our screens have become less bulky. A molecule known as 5CB helped crack the code to engineer liquid crystal displays that can function at useful temperatures. Since this innovation, televisions, computers, cell phones and monitors have never been the same.

The periodic table is a living and evolving reference guide that will continue to shape our world. When in 1992, professor Leland Allen added an extra dimension to the table that focused on chemical bonding and energy calculations, he signaled a broader era of predictions and quantifications. Further refinements will likely continue, and Mendeleev’s invention will stay a relevant cornerstone in the field of chemistry.

For all these reasons and more, let’s raise our glass to the periodic table.