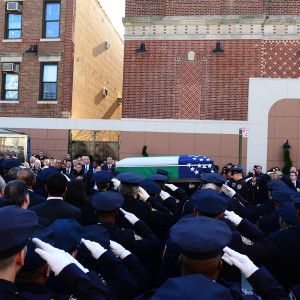 Slain NYPD patrolman Rafael Ramos was laid to rest in Queens with thousands of police officers from all over North America attending, December 27, 2014.

National Police Week events are set to continue today in Washington, D.C., with thousands of attendees expected to honor the memory of officers killed in the line of duty.

The annual tradition dates back to President John F. Kennedy, but this year it arrives at an unusually tense moment for law enforcement, as many U.S. cities — including the nation’s capital — move to reform policing practices and rebuild trust with minority communities.

Following several high-profile deaths of unarmed black men at the hands of police across the country, the District of Columbia’s Metropolitan Police Department is one of thousands of forces planning to outfit officers with body cameras that can capture interactions with members of the public.

These cameras were among the recent recommendations of President Barack Obama’s Task Force on 21st Century Policing, which cited evidence “that body-worn cameras can help de-escalate potentially violent encounters” and research showing “that departments that deploy cameras receive fewer public complaints,” according to a U.S. Justice Department statement.

In the District and elsewhere, thorny questions remain over who should be permitted to see the video captured by cameras, which could jeopardize the privacy of individuals on tape. There are also concerns about the cost of storing footage and the implications of editing or redacting recordings. Officials and activists agree that body cameras are only one imperfect solution to policing problems, but the technology has nonetheless earned qualified support from a diverse group of stakeholders.

Ron Hosko, who advocates for police as president of the Law Enforcement Legal Defense Fund, also expressed cautious optimism in an interview with InsideSources yesterday, saying body cameras “have the chance to change the course of events” in police interactions.

“We as rational human beings are more likely to do the right thing if we’re being watched,” the former assistant director of the FBI said, even as he argued that budget constraints and other concerns likely would prevent wide expansion of camera programs.

Hosko also made the case for body cameras in the conservative magazine National Review last December, writing that even the staunchest defenders of police might be able to find common ground with President Obama despite the “anti-cop agenda” his administration has perpetuated.

“When law enforcement has nothing to hide, they have nothing to lose,” Hosko wrote. He added that many police leaders are “eager to improve our justice system by holding to account those few cops who err in performing their duties, and they wish to exonerate good law-enforcement officials falsely or wrongly accused of misconduct or criminality.”

Hosko told InsideSources that body cameras should be part of much broader policing reforms, including increased training for officers and a reevaluation of zero-tolerance policies that “can lead to heavy-handed engagements with the public.”

In the meantime, he hopes Americans will continue to appreciate the vast majority of law enforcement officials who serve their communities responsibly. “Police Week is about honoring those who gave the ultimate sacrifice,” Hosko said, expressing his worry about “a sense across policing that we’re all under attack — that the profession is under attack.”

In a statement released Monday at the beginning of Police Week, Hosko noted that 126 law enforcement officers lost their lives in the line of duty last year.

“To date, the National Law Enforcement Officers Memorial in Washington, D.C., recognizes the lives of over 20,000 local, state and federal officers who made the ultimate sacrifice for the safety and protection of our nation and its people,” he said.